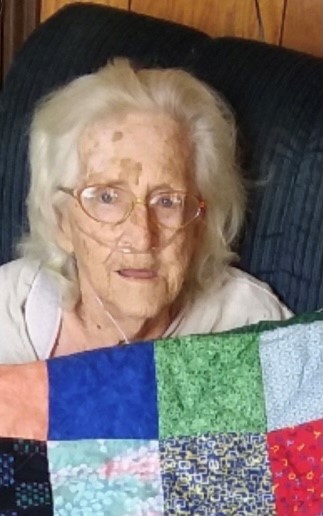 She married Richard Pierce Williams and to this union six children were born, three girls and three boys.

Emma June had several jobs in her lifetime: farmers wife, Brown Shoe Factory, Texas County Memorial Hospital, chicken processing plant and Kabul Nursing Home. In addition to raising her own family, she and Richard were foster parents to several children they considered their own. Emma June also helped raise several of her grandchildren if not to just babysit from time to time.

She was a long-time member of Elk Creek Baptist Church and loved attending if she was able.

Emma June enjoyed visiting with friends and family, and her door was always open for anyone that needed to talk or to just lend a listening ear. She also enjoyed reading western books, puzzle books and coloring books, as well as watching westerns on TV.

Emma June is survived by her children, Sandra Bland of Cabool, Tom “Burr” (Teresa) Williams of Willow Springs, Ricky (Linda) Williams of Elk Creek, and Amy (Bob) Wilson of Cabool; sisters-in-law, Faye Williams and Pauline Rowen; son-in-law, Arlo Anderson; daughter-in-law, Donna Williams; numerous grandchildren, great grandchildren and great great-grandchildren, as well as many nieces and nephews. She also had an extended family and friends at the Raymondville Senior Housing where she was a resident for over 20 years.

She was so much to so many people and always tried to speak more about the positive and less about the negative. She will be missed by those who loved her.