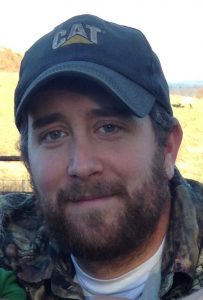 Paden is preceded in death by his grandparents, Roy and Billie Wiseman, Russell and Beatrice Friend; and his father-in-law, Kirk Steinbach.

Paden grew up in Bado and moved to Evening Shade at age 4. Paden was a charter senior at Plato R-V School District and graduated in 2006.

Paden had received Christ as his Father in August 2012, and remained faithful throughout the years.

He was currently employed at TACOM at Fort Leonard Wood. He worked as a wage leader of a mechanics crew. He constantly strived to be the best leader he could; Paden went above and beyond, he always pushed himself to work hard.

Paden loved every form of hunting and fishing. He enjoyed shooting skeet as well as his long-range rifle. He had an obsession with riding horses and working on the family farm. Paden was a board member of the Community Center of NWTC, his goal was to make the community the best it could be for his children.

His greatest passion though, was cooking. His favorite thing was to smoke meat on the smoker he built himself. He loved that people loved his food.

The most important thing to Paden was his family. His wife and children were his entire world. He was a supportive husband, and a wonderful father.

Paden touched so many lives. He will be missed by all who knew and loved him.

Memorials are requested to the Paden Friend Children’s Education Fund, C/O Heritage Bank, Plato, MO. Online condolences may be made at www.evansfh.com.