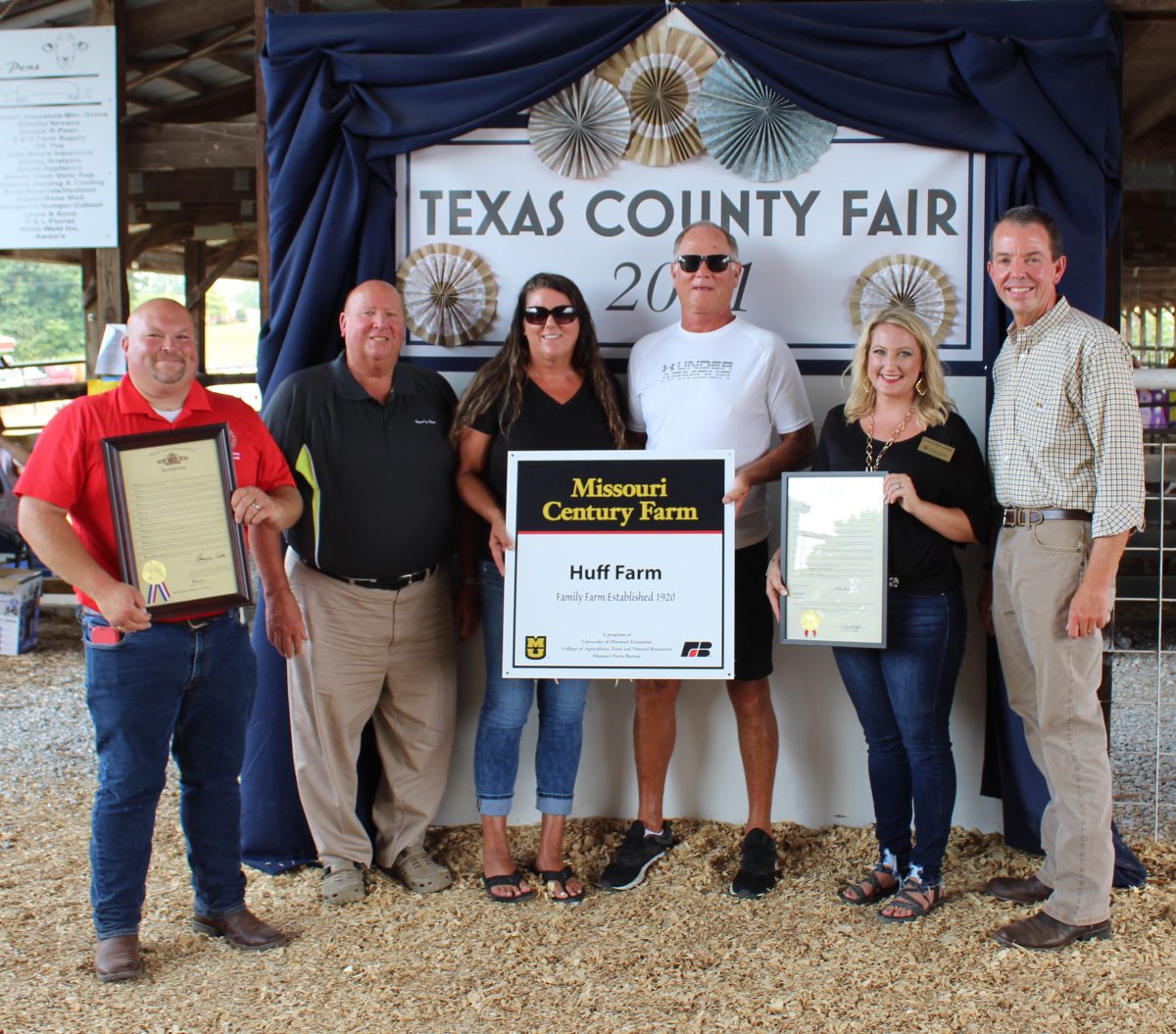 Photo by Shari Harris
Representative Bennie Cook, far left, holds a proclamation by the Missouri House of Representatives honoring the Century Farm of Linda and Scott Huff, center. On the left is Kelly Smith, Director of Marketing and Commodities Farm Bureau, and University Extension’s Texas County Engagement Specialist Brandi Richardson and University of Missouri’s Vice Chancellor for Extension and Engagement Dr. Marshall Stewart are shown on the right.

The Ware-Huff Farm began on October 12, 1920, when William Sherman (W.S.) and Annie Bradford bought an eighty-acre farm on the north end of Licking. Their daughter, Ola Bradford, was 15-years-old. She attended and graduated from Licking High School while living on the farm.

Lynn Ware and his brother, Frank, bought the farm from the Bradfords in 1924, and in 1926, Lynn Ware married Ola Bradford. Six years later, in 1932, Lynn and Ola sold their half of the farm to Lynn’s other brother, August Ware, but they bought it back in 1934. In 1938, they bought out Frank’s half as well, and around this time built a rock house that is still in use today.

Ola kept the farm after Lynn’s death in 1954. In 1986, granddaughter Linda and husband Scott Huff purchased three acres from Ola and built a house next door to the rock house. Ola lived in the rock house until 1988, when her health became poor. When she died in 1992, Ola left the farm to her only child, Sonya (Linda’s mother).

In 1991, Scott and Linda purchased the farm from Sonya.

From the 1920s through the ‘50s, the farm raised milk and beef cattle, chickens, pigs and a few horses. Crops such as hay and corn were also raised. After Lynn died, Ola rented the farm for beef cattle. The Huffs have raised cattle and a couple of horses on the farm. Lately it is primarily used to produce hay.

With two sons, John and wife Casidy and James and wife Brandi, and three grandchildren, Parker, Penelope and Axel, the Huffs are hopeful this farm will stay in the family for another 100 years.