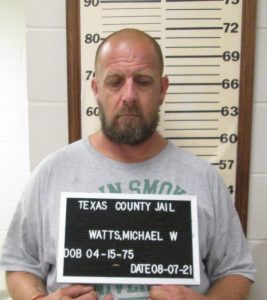 On the evening of August 7, 2021, a Texas County Deputy patrolling E Highway north of Houston observed a black Dodge truck commit several traffic violations. After following the vehicle and observing its operation, the deputy initiated a traffic stop. The driver was identified as Michael Watts. A search of Watts and his vehicle led to the discovery of a substance believed to be methamphetamine and drug paraphernalia.

The above arrest/charges are mere accusations and are not evidence of guilt. Evidence in support of the charges must be presented before a court of competent jurisdiction whose duty is to determine guilt or innocence.