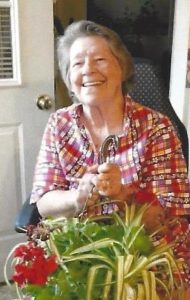 Leveta was called to home to be with her Lord on Tuesday, August 24, 2021, from her home where she resided with her son, Jerry Ray Weaver.

Leveta was a seamstress at Rawlings in Licking for many years and was proud of her work there. Leveta loved gardening, canning, baking, and cooking for family and friends. Working in general on anything was her life and expected her kids to do the same.

A funeral service for Leveta was held on Saturday, August 28, 2021, at 11 a.m. at Abounding Hope Baptist Church in Licking, Mo. A visitation took place one hour prior to the service at 10 a.m. at the church. Burial followed in Mt. Zion Cemetery in Winona, Mo. Online condolences may be left at www.foxfh.net. Arrangements entrusted to Fox Funeral Home.