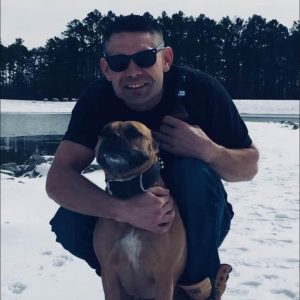 Shane gave his heart and soul to God in June 2021. He loved floating and travelling with his love, Cherrie, and Roxanne. Shane loved back roads, beer, and music (especially Charles’ music). He worked very hard throughout his life and his employers absolutely loved and spoke highly of him.

Shane had a smile that would light up a room. The biggest heart any one person could have, and he was very tender hearted. He would do anything for anyone if he could help. He would give his clothes off his back for someone in need. No one could every stay mad at Shane and he would forgive anyone under any circumstance. Shane was more concerned about his brother while he was incarcerated than he was himself.

A visitation for Shane was held on Thursday, September 2, 2021, from 10 a.m. to 1 p.m. at Fox Funeral Home, 128 S. Main St., Licking. A procession from Fox Funeral Home followed at 1 p.m. for a graveside service at Trout Cemetery with Pastor George Robbins officiating. Pallbearers were Austin Strom, Levi Strom, Charles Ritz, Keith Black, David Rollins and Richard Strom. In lieu of flowers, the family requests contributions in Shane’s may be made to Fox Funeral Home to assist with funeral expenses. Arrangements entrusted to Fox Funeral Home. Online condolences may be left at www.foxfh.net.