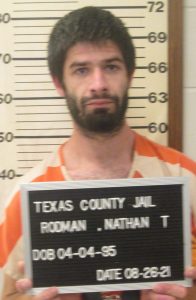 On August 26, 2021, Texas County Deputies were driving on Y Highway in the Clear Springs area and observed a suspicious subject near a cellular telephone tower. Deputies attempted to contact the subject, who was later identified as Nathan Rodman. As deputies approached Rodman he was sitting in a Jeep Renegade sport utility vehicle. Rodman fled in his vehicle and deputies attempted to make a traffic stop. Rodman continued to fail to yield and a vehicle pursuit covering several county roads and lettered state routes ensued. Rodman’s vehicle stopped on Chapel Road, and he attempted to flee on foot. Rodman was captured after a short foot chase.

Deputies located stolen property in the vehicle along with a firearm and methamphetamine. Further investigation revealed that Rodman and an accomplice were attempting to steal wire and metals at the tower site. 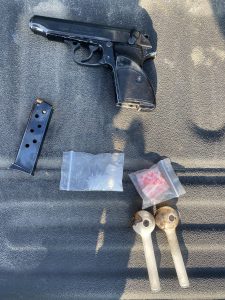