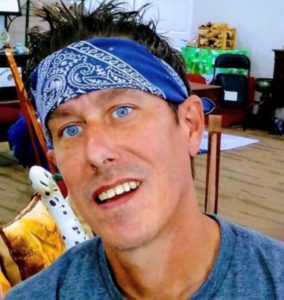 Darrell Lee Aldrich, 46, passed away unexpectedly Tuesday, August 31, 2021, from an undiagnosed heart defect. He was born June 28, 1975, at St Joseph’s Hospital in Alton, Ill., the son of Leroy and Carolyn (Hart) Aldrich.

He attended St Matthew’s grade school until his family moved to Bucyrus, Mo., in February 1985. He graduated from Houston High School in 1993. And attended College of the Ozarks in Branson, Mo., where he was Captain of the basketball team.

For many years he worked for Executive Coach Builders manufacturing limousines. He also worked for Romine’s Motors before starting his own business, Pit Stop’s Ozark Treasures in Houston, January of 2016.

All who knew him loved him dearly and he never knew a stranger. He was the “Class Clown,” always trying to make others laugh. He was famous for giving the peace sign, posting lots of memes and calling everyone butt cheese. He loved hunting, fishing, exploring caves, basketball, skateboarding, and being an amateur magician. What he loved most of all were his kids, Denzel, Devan and Sabrina.

He is survived by his two sons, Denzel (Alexis) Aldrich and Devan Welch, both of Kentucky; one daughter, Sabrina Aldrich of Houston; two sisters, Cynthia (Tito) Torres of Licking and Jamie (Jim) Blackorby of East Alton, Ill.; Cynthia’s two sons, Dustin Shinn of Kentucky and Joshua Shinn of Arizona; Jamie’s two daughters, Carie (Tim) Lamke and Kelsy (Nathan) Hormann, both of Illinois; and two grandchildren, Kaden and Adrena; along with aunts, uncles, great nieces and nephews, and cousins.

Darrell was preceded in death by his parents.