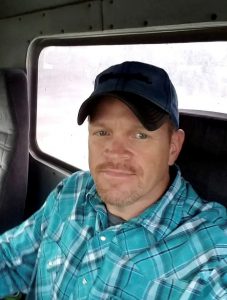 Terry was born November 10, 1970, in Houston, Mo., to Garry Keeney and Linda Matchell. His love for trucking began at a young age and was greatly influenced by his father. All he ever wanted to do was drive a truck like his dad. He was a devoted trucker and worked in the industry his entire life. Cattle hauling was his favorite. Known to many across the country, his handle was “Silver Dollar.” He shared that love with his children by taking each of them on special trips with him over the years. Not only did he love driving trucks, but also his hobby and passion was assembling and painting model trucks. He took special care and many hours to create masterpieces each hand painted.

Terry had a love for movies all of his life. He had a large collection of DVDs and very much enjoyed sharing that love with others. In particular, Smokey and the Bandit was one of his all-time favorites. He introduced all his children and family to it to share in his joy. A lasting memory each of them will hold onto.

Terry was especially proud of his oldest son Airman Tanner Keeney for enlisting with the United States Air Force. He bragged on each of his children any chance he got. He was a loving grandfather who adored his grandbabies.

He will be greatly missed by all who loved and knew him over the years. He made a lasting impression on many people in his life and will be fondly remembered.

A Celebration of Life for Terry will be held on Saturday, September 11, 2021, at 11 a.m. at Fox Funeral Home. Online condolences may be left at www.foxfh.net.

Over and Out Silver Dollar.