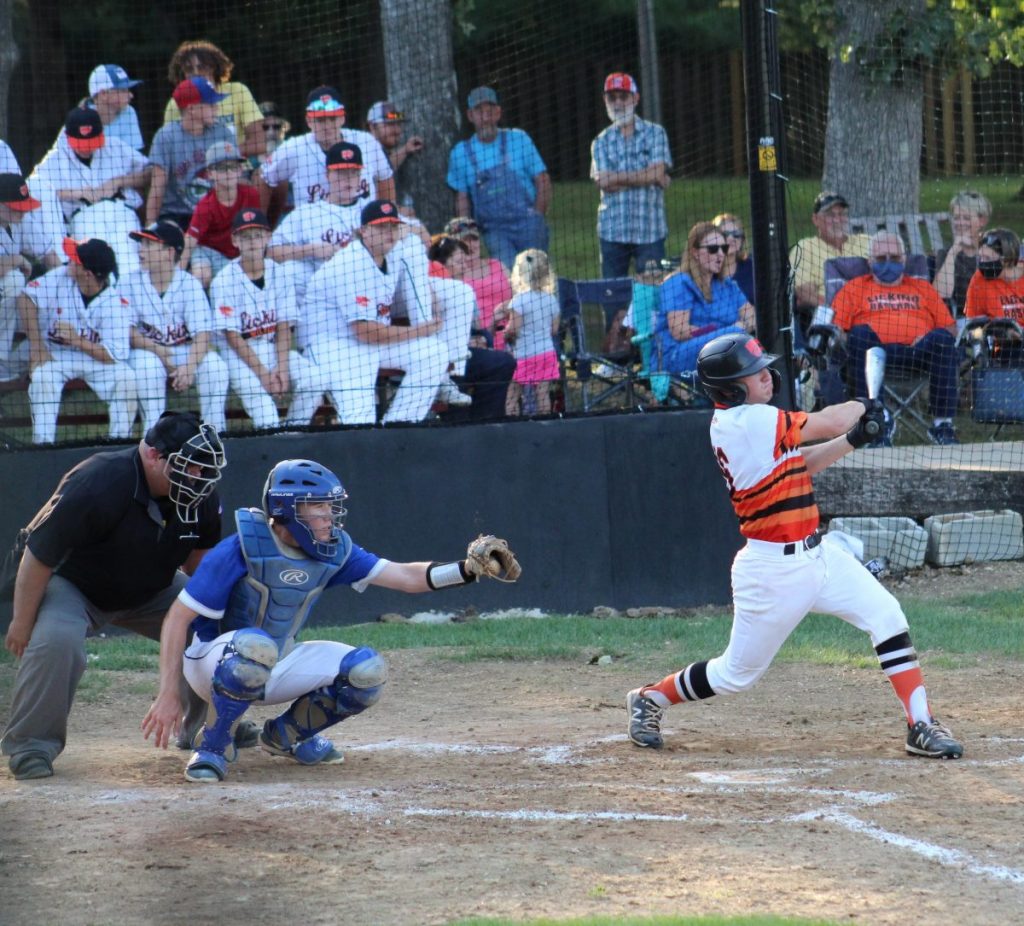 Photo by Shari Harris
Keyton Rinne connects for a double in the third inning against Hartville.

LICKING — The Licking Wildcats won their third in a row Tuesday night with a 7-4 victory over Hartville at Deer Lick Park.

Elijah Ullom opened on the mound for Licking. The defense was less than stellar behind Ullom and permitted three unearned runs for Hartville.

“Elijah did his job, but our defense didn’t,” commented Coach Harv Antle.

Following a pitching change in the second frame, Licking tied the game with two runs in the bottom of the second and one in the third.

Licking captured the lead in the fourth with two tallies. Keyton Cook tripled with one out in the sixth and rode home on a Rusty Buckner single for the Wildcats.

Buckner went to second on a throwing error on the play. Keyton Rinne ripped a single to finish the scoring and put Licking in front, 7-4.

Silas Antle worked around a couple of base runners in the seventh to secure the win. Antle was the third and final pitcher of the night and he got the win with four innings of no hit ball that included six strikeouts.

Carter Sullins relieved in the second and worked one and one-third scoreless innings before turning the game over to Antle. Antle also paced the offense with a 2-for-4 night at the plate.

Buckner was 2-for-2 with two runs scored. Cook tripled, stole a base and scored twice while Rinne had a big night, going 2-for-4 with a double and two RBIs.

In the JV game, four Wildcat pitchers limited Hartville to three runs on three hits in a 7-3 Licking victory.

A 10-hit attack and a first inning that saw Licking score 13 runs keyed the win. Malachi Antle homered and drove in four runs for the winners.

Austin Stephens was 2-for-3 with two RBIs for the Wildcats. Spencer Rogers doubled and drove in three runs while Keyton Cook scored three times and collected two RBIs.

Kaiden Wantland was the beneficiary of the generous run support. The senior pitched three innings for the win and gave four runs on three hits with five strikeouts.

Licking improved to 4-1 with the win.

The JV Cats won for the second time in as many games with a 6-2 decision in the nightcap. The JV Wildcats moved their record to 2-0.

LICKING – The Licking Wildcats extended their winning streak to five games on Friday night at Deer Lick Park with a 9-0 shutout over the Alton Comets.

Malachi Antle and Austin Stephens paced the Licking offense. Antle was 2-for-3 with three RBIs, and Stephens drove in a pair of runs to go with his two hits.

Licking’s Cole Wallace set the table for the offense with three hits and three runs scored from the leadoff spot. Rusty Buckner had a hit and two runs-batted-in as well.

Kannon Buckner opened for Licking and worked three scoreless innings. The freshman allowed just one hit and one walk while fanning two.

Keyton Cook was the winning pitcher. He permitted one hit over four innings and racked up six strikeouts.

The win lifted Licking’s record to 5-1 for the fall. The Wildcats begin play in the Frisco League Tournament at Stoutland on Wednesday as the number one seed.