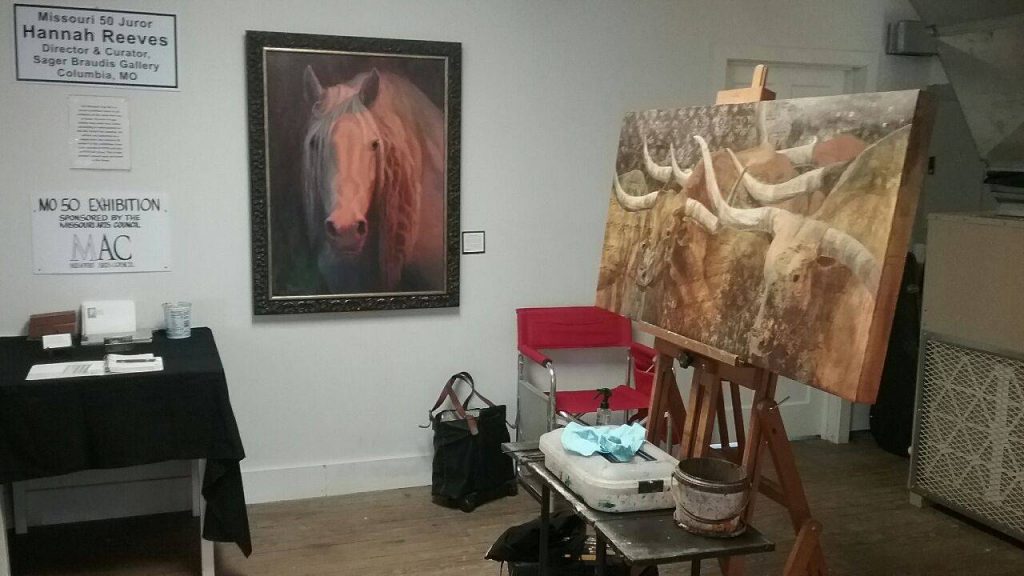 Photo submitted
Artist in Residence Lanie Frick demonstrated her creative process to fair-goers as she worked on the horns of her longhorns in this painting at the State Fair.

The Missouri State Fair resumed in all its glory this year, August 12-22 in Sedalia. This year’s fair was a special event in the lives of at least four Licking area residents. Artist Lanie Frick was invited to be an artist in residence at the fair; artist Sophia DeLaat had both of her submissions to the Missouri 50 (art competition) accepted; and mother and daughter Stacie and Cadrian Hutsell resumed a family tradition of working with admissions at the fair.

The organizers of the State Fair research and select a few Missouri artists each year for the positions of Artists in Residence. One to two artists are in residence at a time, for a period of several days, before new artists are rotated in to the positions. Frick was in residence August 13 – 17.

As an Artist in Residence, Frick displayed several items of her work. She enjoyed visiting with the public, helping them to understand art and what it’s like to be an artist. Frick said she was pleased with the response to her art, and that those who purchased paintings wanted to take it into their homes.

Frick also demonstrated her creative process to fair-goers. She continued work on a 24” x 48” painting of longhorn cattle, focusing during the fair on the horns of the cattle. The painting is one of her “Songs of Life” series, in which she applies sheets of music to the canvas prior to painting, with the musical notes visible through the paint.

Frick received high compliments on her display from Alan Weaver, a ceramicist from Sedalia who chose this year’s artists in residence. A multitude of people came through the art building where she was located, and she believes the exposure of her art to so many people will have positive results. Interest has already been expressed in Frick creating an online Zoom art class.

She says she enjoyed getting to visit with the public and getting their feedback. A highlight of the experience was “seeing my work new, through their eyes.” Frick says, “Overall it was a lovely experience and I would do it again.” 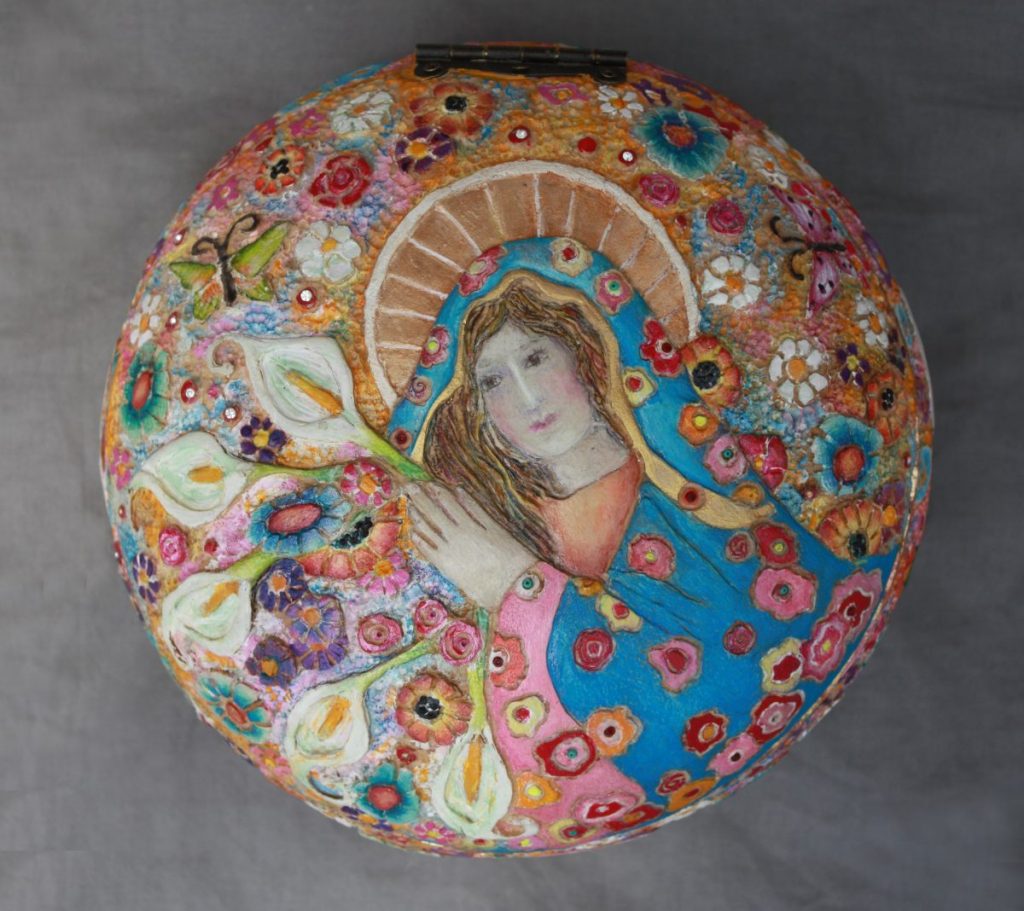 Sophia DeLaat was another local artist whose work could be seen at the State Fair. The Missouri 50 is an art competition held annually at the State Fair. Any Missouri artist can enter two submissions, but only 50 are accepted. All art projects are placed in a single category, whether three-dimensional art, two-dimensional art or photography. Those accepted are shown at the State Fair and are judged, with the four top projects winning cash prizes, and with several honorable mentions receiving smaller cash prizes. The night before the Fair opens, an art exhibit is held featuring the Missouri 50 entries.

DeLaat is known for her fabulous gourd creations. She entered two pieces in the competition, and both were accepted.

“The Ave Maria gourd is a carved music box that actually plays the tune ‘Ave Maria.’ As a gourd artist, I love the alchemical thought of taking Nature’s gift and refining it into a work of art that is musical,” said DeLaat in her submission description. The Ave Maria gourd received honorable mention in the competition.

“Beauty for Ashes is a story gourd carved to depict Quan Yin, the Chinese Buddhist goddess of mercy. She sits astride the dragon she has tamed through compassion,” said DeLaat in the description of her second entry.

Not many artists are fortunate enough to have both entries chosen for the competition. This is the second time DeLaat has had two submissions make it into the Missouri 50. Two years ago she was likewise honored, and had an opportunity for a YouTube interview of artists afterward.

DeLaat only attended the Fair one day in 2019, but traveled with Frick this year so was there for five days. She says she had a great time at both fairs.

“I really enjoy interacting with all the people,” DeLaat says. “It helps promote the arts.”

Look for DeLaat’s work next year in the Missouri 50.

Frick and DeLaat will be having a show with two other artists in February in Rolla at The Centre if you are interested in seeing more of their work. 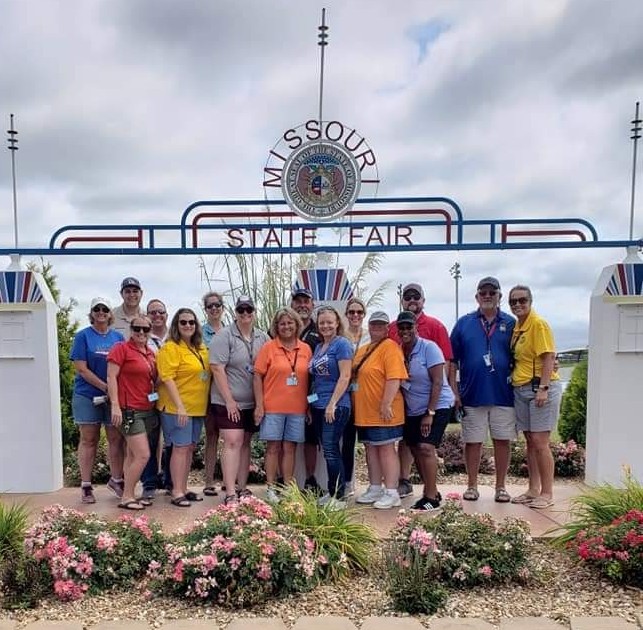 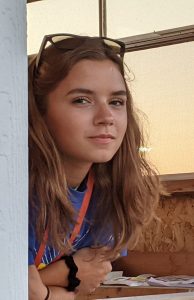 Stacie (Layton) Hutsell and Cadrian Hutsell, a mother – daughter team from Licking, were an important part of this year’s State Fair. Stacie was Admissions Supervisor over the Missouri State Fair Arena this year, and Cadrian was a cashier. Stacie explained that the State Fair is a family event for the Laytons. Her sister, Cendy (Layton) Carson, is now Assistant Superintendent of Admissions, and has been a part of the State Fair for over 30 years. Brother Mike Layton was a Grandstand Gate Guard. Stacie’s son, Cainan Hutsell wasn’t able to work at the fair this year, but he was a Parking Supervisor in 2019. Her daughter, Sadie, will be 14-years-old in May, just in time to work next year as a ticket taker.

People attending one night of the Truck and Tractor Pull and both nights of the Bull Riding were treated to something often enjoyed by those who attend Licking High School home games. Cadrian Hutsell performed the National Anthem those nights to the delight of fair-goers.

Stacie Hutsell began working at the State Fair when she was in high school. She continued the annual trek to Sedalia until seventeen years ago, when conflicts with school schedules made it no longer possible. This was her first year back, and she said it took a little to “knock the rust off and get back in the groove of it.” There were difficulties in finding employees to work the fair and some 20-hour days, making sure staff was present and in place for Arena events, and two nights for Grandstand events and Arena events running consecutively. Rodeo, Truck/Tractor Pulls, Bull Riding and Motocross are some of the events that took place in the Arena.

The Hutsells were at the State Fair beginning the Sunday before for training, then Stacie returned to Licking, where she is a teacher, for her two days of training at school before rejoining Cadrian and the rest of her family for the entirety of the fair.

“I appreciate being a part of it,” says Stacie Hutsell, “seeing people enjoy themselves and trying to celebrate Missouri.” She added, “I thought it was important for her (Cadrian) to see all the entities coming together.”

She said people attending the fair appeared to be glad to get out and have some sense of normalcy. Though there were some concert changes necessary and overall attendance may have been a little down, good crowds attended the events. The Hutsells enjoyed the experience and the time spent with family. They also appreciated the opportunity to be a part of the success of the 2021 Missouri State Fair. 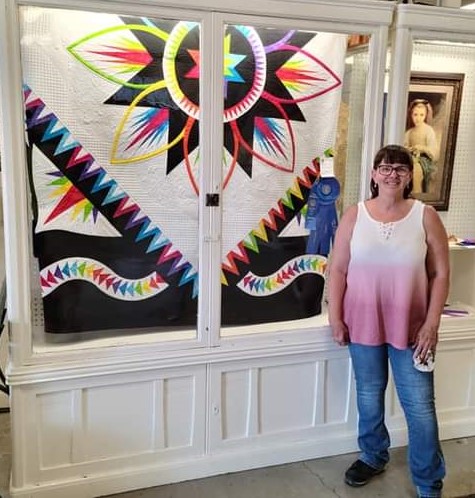 Photo submitted
May Black and her awards-winning quilt, “Moon Catcher.”

May Black, a member of the Piece and Plenty Quilt Guild (PPQG) of Rolla, received First Place and Best of Show awards for her “Moon Catcher” quilt at the Missouri State Fair.

This quilt is one of the pattern designs from the Judy Niemeyer collection taught by Black. She has been creating quilts from Judy Niemeyer patterns for eleven years and has been a certified instructor for the past nine years.

Recently the PPQG enjoyed a trunk show at their quilt guild meeting; Black entertained the members with a view of her first quilts to her present, an interesting journey, to say the least.

In September the PPQG will have the opportunity to attend another of Black’s Judy Niemeyer Quilt Pattern Classes, a paper piecing class. It is an interesting technique in quilt piecing and is enjoyed by many quilters.

Black has been showing her quilts to members for the past eighteen years and still amazes them with her beautiful creations. Congratulations to May on her recent Missouri State Fair awards.

The PPQG meets on the first Thursday of each month, beginning at 6 p.m. Presently they meet at the First Baptist Church Mission Building, located at 801 Cedar St. in Rolla. Visitors and new members are always welcome. For more information you may call PPQG President Harriet Bain at 573-202-4487 or come to one of their meetings. It is fun just to view the creations displayed during their Show and Tell Session at each meeting.