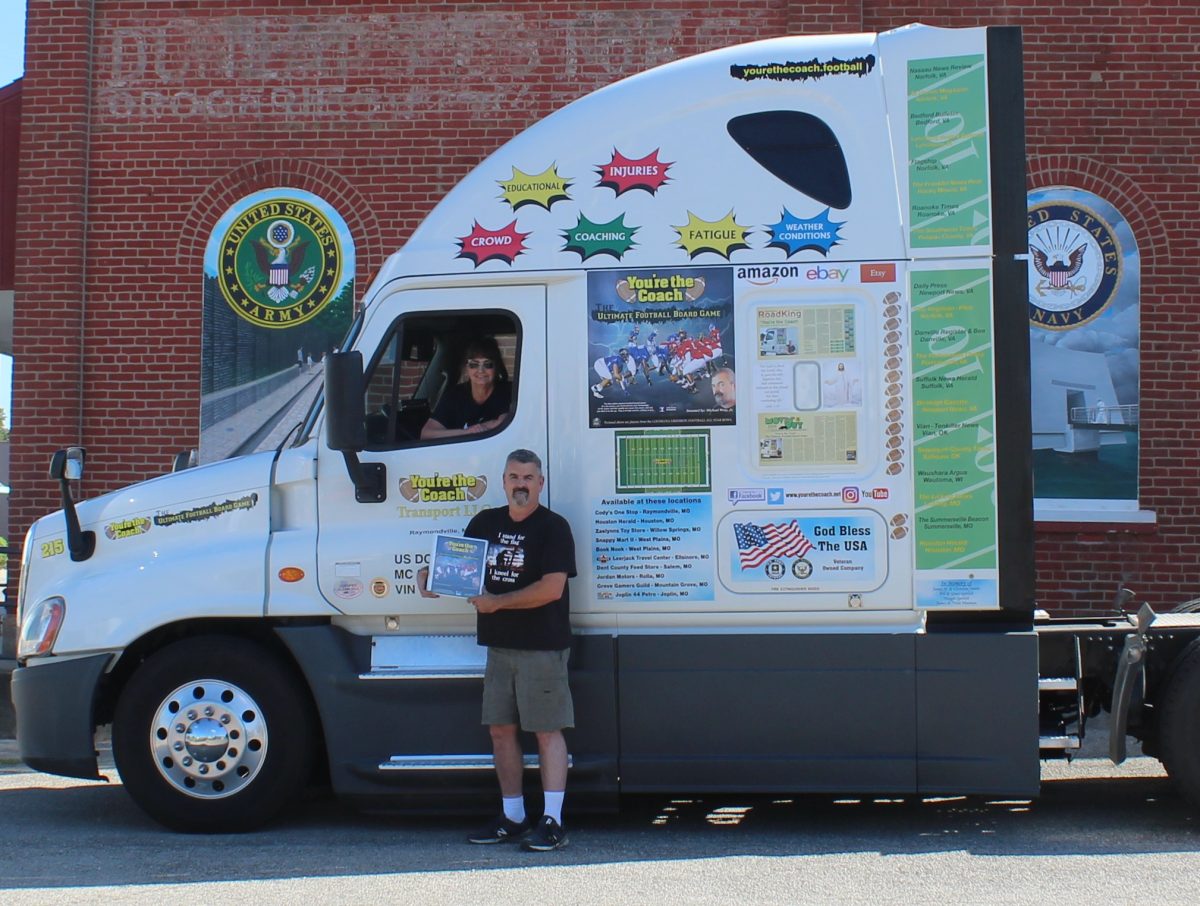 Photo by Shari Harris
Inventor of “You’re the Coach” Michael Wray, Jr., and fiancée Chrissy White promote the football board game as they travel.

Fall means football fever for many. The NFL regular season started September 9, and high school seasons are underway. For those who are serious about the game, Raymondville resident Michael Wray, Jr., has produced “You’re the Coach: The Ultimate Football Board Game.”

The game can be played by one or up to 20 players. Rolls of the dice decide variables like height, weight, class, speed and strength of your team’s players. Evaluation charts give you a power rating for each player. Penalties and injuries, weather conditions, fatigue and the crowd are figured into the game. You can choose offenses and defenses, and try to outmaneuver your opponent. Players can assume roles from Head Coach all the way to cheering fan rolling the dice for the excitement factor, which can affect the outcome of plays. This multi-layered game captures all the nuances of a live football game.

Wray began thinking about the game in 1982, when he was in eighth grade. As a member of the U.S. Navy, he took a prototype of the game with him on the USS Miller and the USS Nassau and played it with his fellow sailors. Over the years, he has improved and fine-tuned the game into what it is today. He’s sold his game at some local establishments, among them are Cody’s One-Stop in Raymondville, and they will soon be at The Licking News. Wray recently achieved a goal of selling his game at Walmart.com; it is also available at Amazon, E-Bay and Etsy. Roku TV has a “You’re the Coach” channel, which was developed by Coach Robert Humburg, featuring coaches playing the board game.

Wray promotes his game whenever possible. Over the last few years, he has been interviewed about his board game by several trucking magazines and newspapers. Wray’s largest marketing tool, however, is something he takes with him all over the United States; he is an over-the-road trucker and has his own truck. You can’t miss his rig; it is covered with emblems and photos about “You’re the Coach.” Artist Doug Lentz has contributed some of the painting of the truck. The hood honors two high school football players from Wray’s school years at Liberty High School in Bedford, Va., where he played football.

Fiancée Chrissy White accompanies him on the road at times. Wray does the driving, but he enjoys the company and the time spent with White. She supports him in his time spent promoting the game and helps with packaging and shipping the games from their home in Raymondville. Wray gives credit to God for his enthusiasm and ingenuity in developing the game and for the success of the game.

“Without God, none of this would be possible,” said Wray. “He’s opened some huge doors.”

If you’re an armchair quarterback and think you know football, pick up a copy of “You’re the Coach” and test your skill. It can deepen your understanding of football, and you can adjust the level at which you play to fit your skill level. Some reviewers of the game mentioned the importance of strategy, not just chance in playing the game. Yet the roll of the dice introduces that element of chance, which is present in every live football game.

You can go to www.yourethecoach.football for more information and to read those reviews.