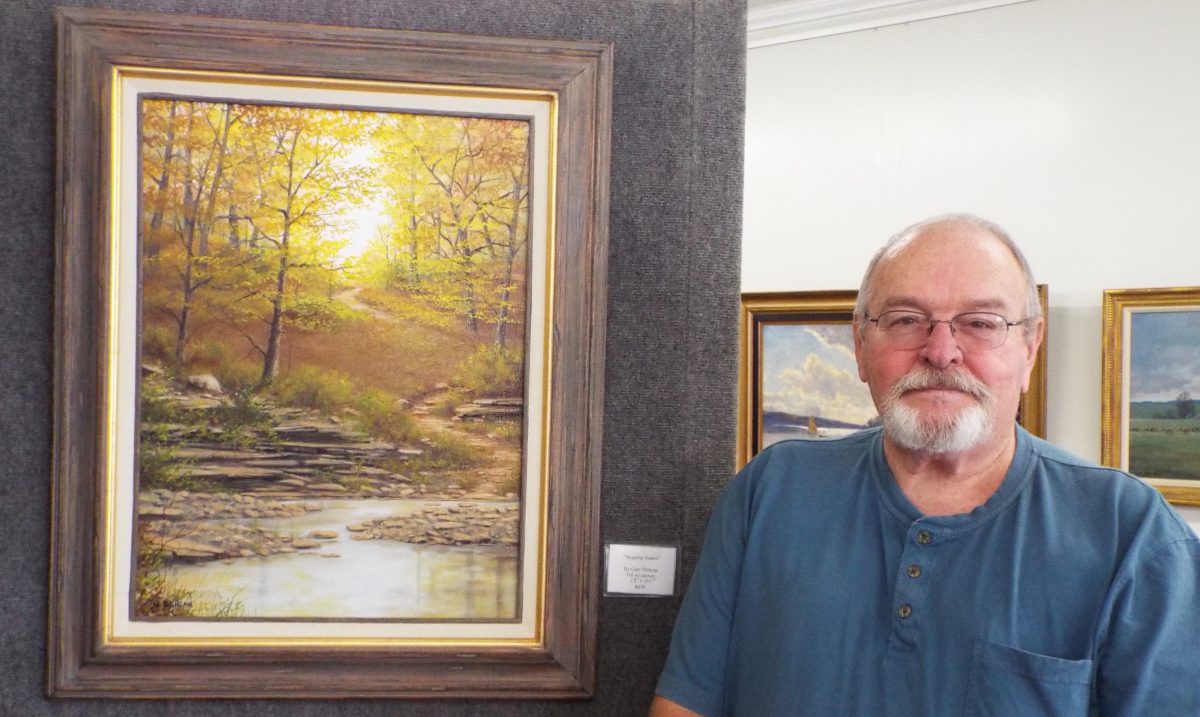 Photo by Christy Porter
“Stepping Stones,” an oil on canvas painting, is one of Gary Duncan’s personal favorites.

The Texas County Museum of Art & History hosted a reception Sunday in honor of Gary Duncan, realistic wildlife and landscape artist, featuring “My Past 30 Years of Painting.” The artwork exhibit of paintings done in oils, acrylics and ink will be on display throughout the museum for the month of September.

Included in the collection is a painting, “Waiting for the Pear to Fall,” that was inspired from the “Collections of Cowboy Poetry,” written by Richard M. Dunlap with illustrations by Gary Duncan.

Artist and personal friend Tracy Zimmerman Szanto, of Dreamland Machine Quilting, was so inspired by Duncan’s oil painting “Mountain Repast,” she turned the painting into a quilt creation that is also on display.

Diane Carter provided live music that included gospel and early rock and roll music on the keyboard. Richard M. Dunlap, author of “Collections of Cowboy Poetry” held a poetry recital of his work, and also played the guitar at intervals. 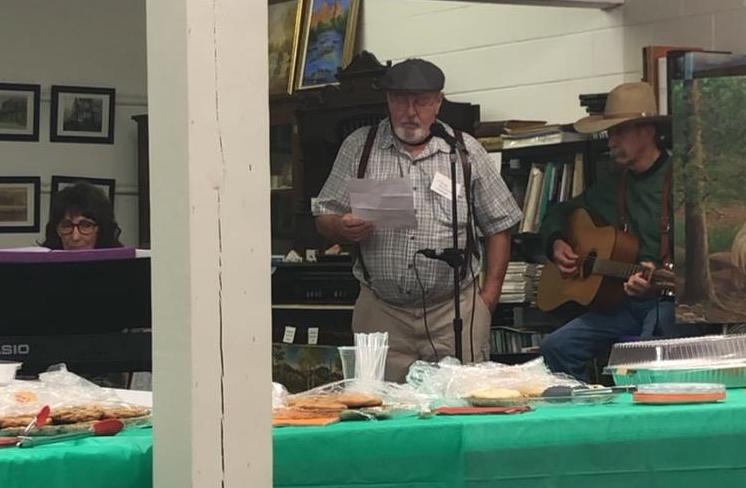 Basic Biscuits provided refreshments with additional treats provided by others.

Duncan, originally from Excelsior Springs, learned to love nature while growing up on his grandparents’ farm, sometimes drawing inspiration from the landscapes he experienced as a boy. After serving in the U.S. Air Force for four years, he moved to Colorado. At the age of 40, Duncan, for the most part was self-taught, but did take informal instruction in painting classes and completed his first painting, going on to do his first art show in 1992. After relocating to Ft. Madison, Iowa, he worked out of a self-built studio and continued to paint, creating work in different types of mediums, this prior to returning to Missouri.

Influential to his artistic endeavors was a weeklong workshop held in Sedona, Ariz., in 1999 by a nationally acclaimed artist. Ensconced in 360-degree beauty on location, he began to master the art of focusing on scenes within scenes; this was necessary as painting was done on an 8-inch by 10-inch canvas with two “masterpieces” being completed in a day.

He now continues his passion doing realistic landscape, which is as often as not Ozark nature. “The color in the red soil and the contrast and depth that nature provides always inspires,” says Duncan. “Landscapes speak for themselves; I have no desire to explain my artwork. I have a good photographic visual memory, so many of my paintings come from places I’ve been, and I also paint from photographs as a reference. The painting itself goes its own direction from the reference point; I inject a little bit of artistic liberty.” Interestingly enough, Duncan believes that purple is the true color of nature and is very often the base color for all others.

Duncan has also ventured into rustic furniture making, stemming from a personal necessity of the functional art. He also “whacks on wood,” creating only rustic carvings. Continuing in the functional and decorative, Duncan’s repertoire has included hand woven baskets.

Arthritic hands limit Duncan’s creations in rustic furniture, due to lack of grip, and at times with his painting due to positioning of the work in progress. He is enjoying the black and white scratchboard ink medium, which is done on a smaller scale.

Duncan and his wife, Jackie, are currently administrators for the museum. He has also worked with the Art Club at Licking schools and had a class with approximately 20 home school students, age 12- to 18-years-old. “The classes were really rewarding; the students were captivated while doing their artwork,” said Duncan. He also taught classes years ago while living in Ft. Madison, Iowa, and Kansas City, Mo.; his students then included school age students and he gave private lessons.

“Age, I find, is thought provoking. I have sold a fair amount of art over the past 30 years, however many of my personal favorites have been in my personal archives. I created it, I like it, and I enjoy it on my wall. But I have reached a point where I now want others to enjoy my work as I have done,” said Duncan. “I have no intentions of hanging up my brushes and plan to paint as long as the good Lord allows.”