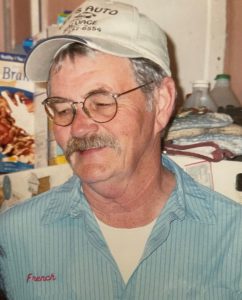 Dennis grew up in the Lynchburg area and attended Plato Schools.

Dennis drove a truck for over thirty years, and rode with his son Nick when he drove, making many friends. He enjoyed working on old cars, and pickups, especially with his son, Nick, and spending time at Pa and Grans. He was a loving husband, and father, and will be greatly missed by his family and friends.

Even through all his issues he never stopped fighting and never gave up. He talked to God everyday and never could stand what Jesus lived through for all of us. He loved them both and talked to everyone about them. He was a board member of Wildwood House of Prayer in Raymondville, and cared about the church and its members.

Don’t worry Screwdriver, Jesus has got his front door this trip, and old Frenchie will make sure the bears are gone and the chicken coops are closed ahead for you and all of us Hero.

Services were Tuesday, September 21, 2021, at 11 a.m. in the Wildwood House of Prayer, Raymondville, Mo. Pastor Paul Murray officiated with burial in the Friendship Cemetery.

Pallbearers were Nick French, Denim Lee, Joe Bressie, Tommy French, Don Lee and Kory Cooper; Honorary Pallbearer was Andy (Screwdriver) Revelle. Memorials may be made to Wildwood House of Prayer. Services were under the direction of Evans Funeral Home; online condolences may be sent to www.evansfh.com.