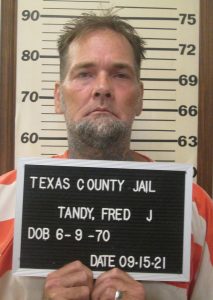 On September 14, 2021, a Texas County Deputy received a report of a burglary and a stolen motorcycle from a rental storage unit in the Cabool area. After viewing security video of the incident, the deputy was able to work with a Cabool Police officer to identify a suspect in the theft of the motorcycle and other storage unit thefts in Cabool. The Cabool Police Department had previously identified Fred Tandy as a suspect in a stealing case. A Cabool Police officer traveled to Ozark County and located Tandy with the assistance of the Ozark County Sheriff’s Office. The stolen motorcycle was recovered at Tandy’s residence by the Ozark County Sheriff’s Office. Tandy was interviewed at the Cabool Police Department and then transported to the Texas County Jail. During transport to the jail, Tandy admitted to stealing the motorcycle.

Sheriff Scott Lindsey’s comments, “This case is a great example of law enforcement agencies sharing information and working together to recover stolen property and make an arrest. Thank you to the Cabool Police Department and Ozark County Sheriff’s office for their assistance in this case. The security video provided by the owner of the storage units was also key in this investigation as well, this was truly a team effort with everyone involved to seek justice.”