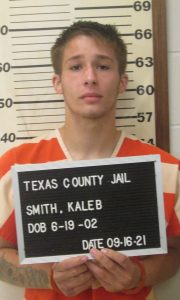 On September 16, 2021, Texas County Deputies responded to County Line Road in the Mountain Grove area for a report of a domestic disturbance. Deputies contacted a male subject operating a vehicle on the county road. The male later identified as Kaleb Smith stated his female companion had run into the woods. Deputies located the female who reported Smith had bitten her shoulder, tackled her, and dragged her down the road while punching her face, back and head. Deputies observed marks and injuries on the female consistent with the report.