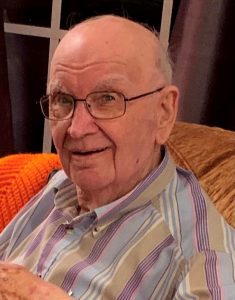 Wilburn accepted Jesus Christ as his Lord and Savior at a young age. He was a member of First Baptist Church, Houston, where he was ordained as a deacon in 1968.

He was preceded in death by his wife, Imogene; his parents; his six siblings, Ruth Rannifeld, Velma Kirkman, Willard “Lum” Elmore, Milton Elmore, Windsor “Pete” Elmore and Lloyd Elmore. He is survived by his son, Marty, and wife, Patti, of West Plains; granddaughter, Jennifer Vandall, and husband, Zandy, of Moberly; three grandsons, Jared Elmore, and wife, Jordan, of Republic; Adam Elmore, and wife, Kacey, of Nixa; and Colin Elmore, of Nashville, Tenn. He is also survived by seven great-grandchildren, Grace Vandall, Ethan Vandall, Carrington Elmore, Charley Elmore, Austen Elmore, Asa Elmore and Archer Elmore; and a host of other family and friends.

In 1946, Wilburn graduated from Houston High School. He joined the United States Navy and spent the next two years seeing the world as a sailor serving on two aircraft carriers: the USS Kearsarge and the USS Midway. Upon leaving the Navy, he attended Oklahoma Baptist University for a time before returning to Houston, where he started his career as a clothier at Leavitt’s Department Store. He would spend the next twenty-five years at Leavitt’s, managing the store for twenty of those years. In 1973, Wilburn started his own business, Elmore’s Men’s Wear. After her retirement as longtime bookkeeper at Duff’s Western Auto, Imogene joined her husband in the clothing business until her health failed. Wilburn continued to operate the store until the summer of 2020 when his health waivered. He was proud to say that he spent seventy years on Grand Avenue in Houston.

Wilburn loved southern-gospel music, and, along with his brother, Lum, was an original member of the Harmoniers Quartet, which was formed in 1948. There were many personnel changes over the course of their seventy-year ministry-far too numerous to list. In the 1950’s and 1960’s, the Harmoniers brought many nationally known gospel groups to Houston, to include the Blackwood Brothers, Statesmen Quartet, and the LeFevre Family.

After the death of his wife, Imogene, he found a second family in the form of the unofficial “Mayuga Cafe Supper Club,” a small, sometimes revolving, group of folks who met most weeknight evenings at the Texas County Memorial Hospital cafeteria for supper. He loved his supper companions, and he loved the camaraderie that they provided.

An avid storyteller, Wilburn loved to talk about his time in the Navy, quartet experiences while traveling and singing, and growing up on a farm near Houston. He loved his Lord and his family with his whole heart. He will be greatly missed by all who knew and loved him.

Memorials may be made to First Baptist Church. Online condolences may be expressed at www.evansfh.com.