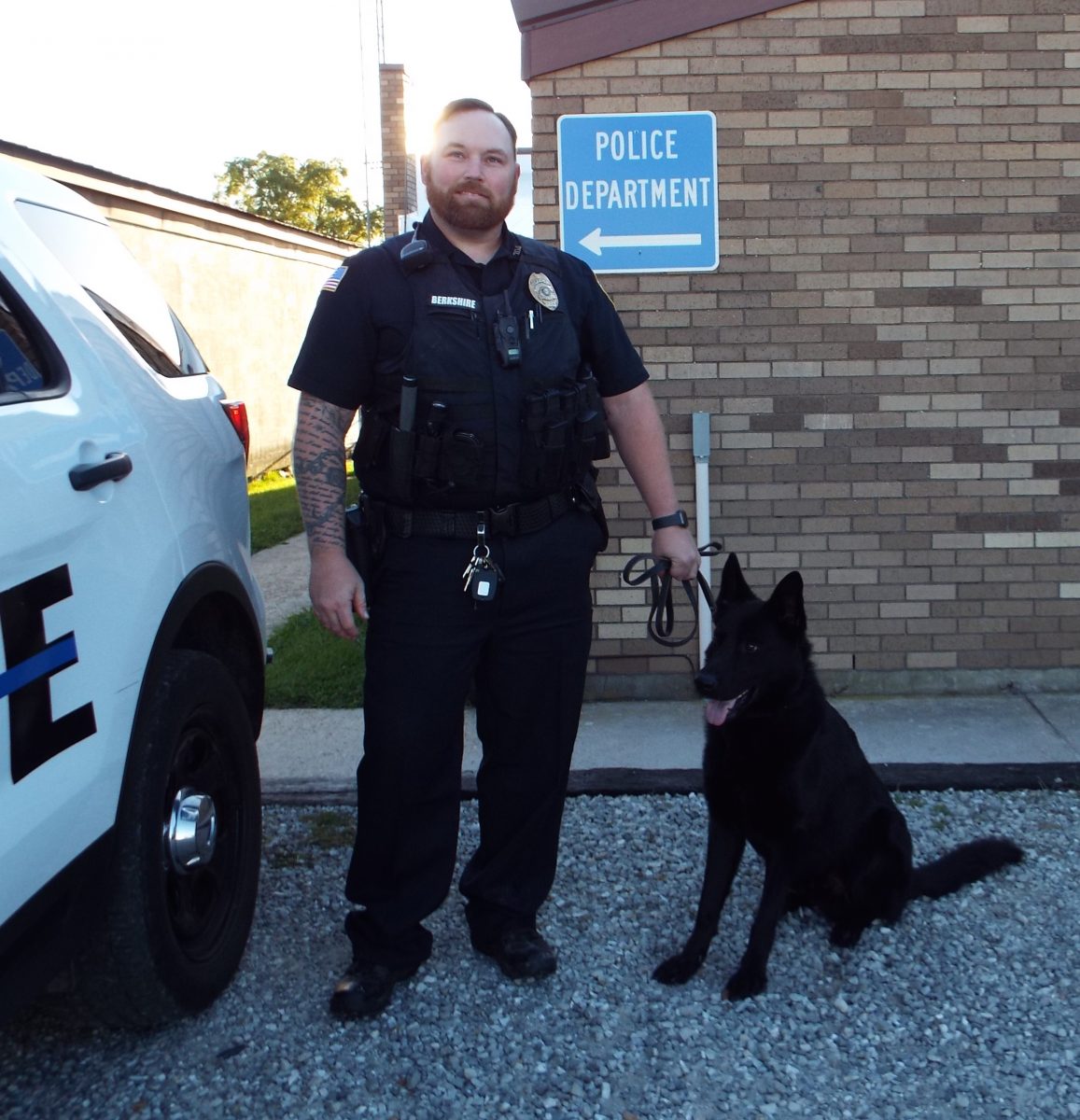 The Licking Police Department now has a new K-9 team. Officer Kaleb Berkshire is not new to the police department but has been with the police force for over two years; K-9 Officer Atos is the recent addition.

“A canine program can add a lot to any law enforcement department and the city that it protects,” said Berkshire. “It is a massive deterrent when the drug users know there is a K-9 team and they will typically not bring the drugs into the city. The dog’s presence also lessens the endangerment to an officer by reducing the likelihood of a suspect resisting arrest.”

Berkshire purchased Atos from FM K9 in Michigan, and is leasing him to the City of Licking for the Licking Police Department. He maintains the care of Atos, with the exception of veterinary care for any injuries that may be acquired while on duty and the special vehicle equipment required for transport and support of Atos’s law enforcement specialties.

Atos is a two-year old Belgian Malinois and Dutch Shepherd mix, born in Belarus, Europe. Both breeds are known as herders and workers; they are loyal and intelligent. Atos took his initial pre-training at FM K9. Berkshire selected Atos, a dual-purpose law enforcement dog, in June, and acquired and went through training with him in September.

The K-9 team has been accredited by the North American Police Work Dog Association, which sets the standard and is used by all major law enforcement departments.

Certification in articles search is more specifically a situation in which articles are thrown during a tracking or escape; Atos is trained to retrieve those articles, making proof and prosecution more likely.

Narcotic detection is invaluable when drugs are suspected in an investigation, but action cannot be taken without probable cause. Atos detecting narcotics provides the probable cause, and can ultimately and over time lead to a greater reduction in drug trafficking within the area.

Atos has integrated very well into the Berkshire family. The home-life includes several hours daily of ongoing obligation training and record keeping, done in short segments with breaks, this after Berkshire works 12-hour shifts on duty.

“It’s worth the extra hours for the department to have this new team member. We’d (the department) like to be one of the best working teams in the area, so we put in the hours to make that happen,” shared Berkshire. “Licking has a small department but the guys are dedicated and everyone is willing to go above and beyond for the team. They each bring their special talents and specialties to the team. This diversity is usually only seen in larger departments.”

Berkshire joined the military upon high school graduation, initially as a Calvary Scout in the Army and then as a Green Beret, Special Forces. Law enforcement was a perfect fit when Berkshire retired from the military and missed the camaraderie and bond of serving with others for the protection and common good of all.

When asked why Berkshire decided to become part of a K-9 team, he responded, “When in the service, Special Operations, we utilized a specially trained dog for detecting explosives and I saw what a huge asset the canine was in operations, both in the states and overseas. That experience overlapped and I saw the need for a similar expertise in law enforcement. Chief Burton and Sgt. Allgire were very supportive, having had prior experience, each as a part of a K-9 team.”

He takes seriously the city’s trust in him and assuming the responsibilities and liability that comes with his specialized position as a K-9 officer.