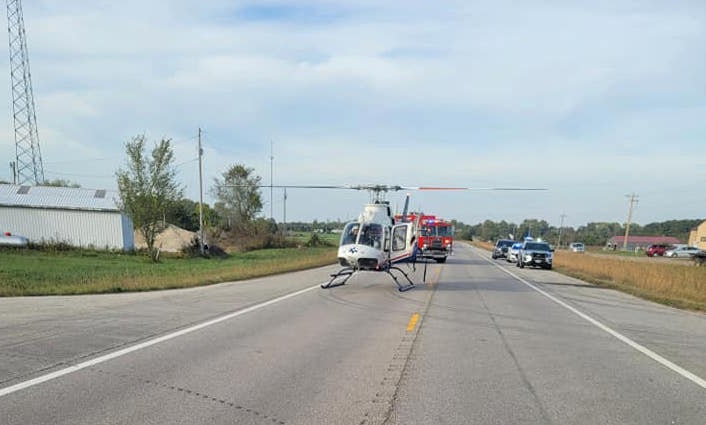 Photo courtesy of Edgar Springs Fire Protection District
U.S. Highway 63 was blocked as one of the four medical helicopters landed at the scene.

A two-vehicle head-on crash resulted in serious injuries to five individuals and required the response of five air ambulances to the site on U.S. Highway 63, one mile south of Edgar Springs. The accident happened at 3:44 p.m. on Saturday, October 9.

A Licking family was southbound in a 2019 Nissan Kicks when it collided head-on with a northbound 2007 Chevrolet 1500 pickup. Robert L. Burns, Jr., 39, was driving the Nissan, with passengers Kimberly R. Burns, 32, and two female juveniles, ages 9 and 16. Two juveniles from Mountain View were in the Chevy pickup; the driver was a 17-year-old male and his passenger was a 16-year-old female.

The driver of the Chevy pickup did not sustain injuries requiring transport to a hospital, but the passenger was taken to Women’s and Children’s Hospital in Columbia by Arch Air Care.

The MSHP crash report indicates neither driver was wearing a seat belt. Kimberly Burns was wearing one, and it was unknown whether the remaining occupants of the Nissan or the Chevy were utilizing the safety devices. Both vehicles sustained total damage.