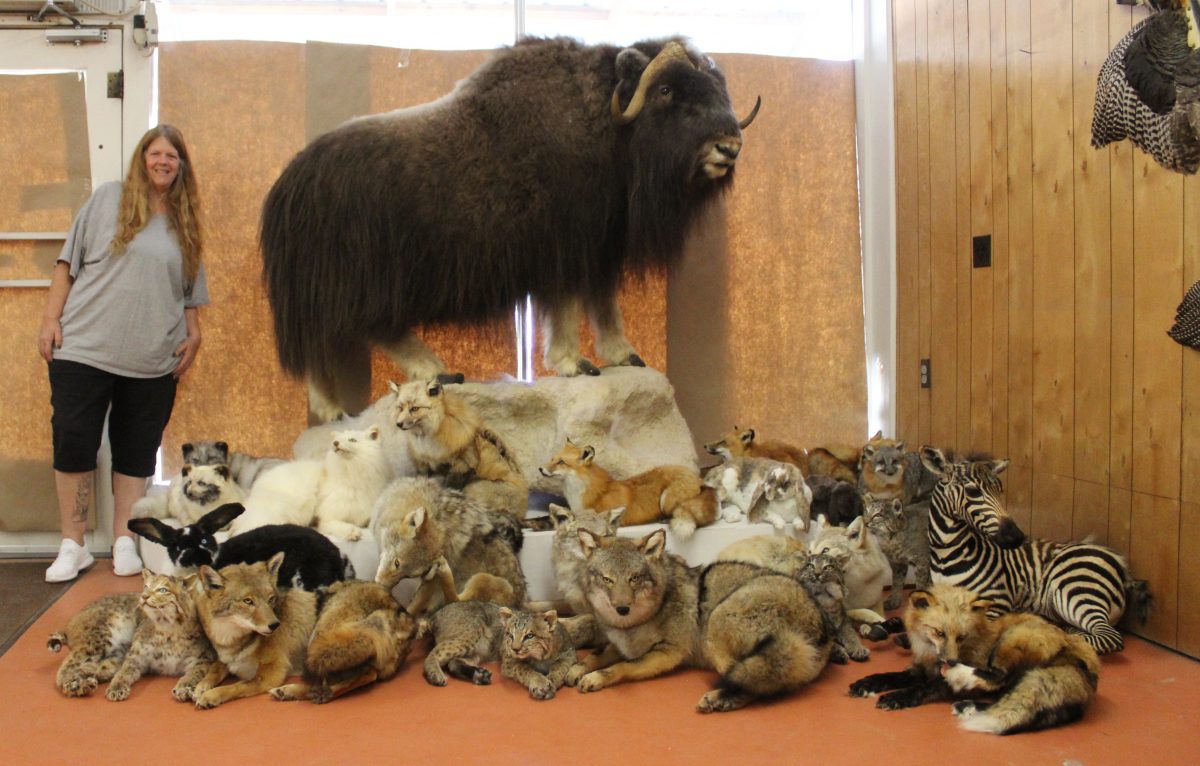 Photo submitted
Kim Townsend has a collection of small animals ready to be shipped. Beaumont, the musk ox, isn’t one of Townsend’s creations, but he stands watch over her collection of critters.

At the age of 46, Kim Townsend came to a fork in the road of life and made a sharp turn. After six years of studying creative writing and history with her husband, he died of cancer. He had been diagnosed the month he graduated with his degree, and the dream of working together on historical writing never came to be.

Needing a new direction, Kim Townsend, a Salem native, enrolled in law school. But before she could begin, taxidermy caught and held her attention, and instead of law school, she attended the Pennsylvania Institute of Taxidermy.

The first five years after graduation were rough, Townsend admits. Forms and supplies were expensive, trapping for furs was time consuming. But experience taught her less expensive means of doing her work, and her wholesale business took off.

This year, Townsend has replicated about 100 fur-bearing animals in their prior forms. Her work recently exceeded the 12’ x 20’ portable building she owns, so she sought a new location, settling into South Main Street in Licking, across the alley from the Texas County Museum of Art & History. As a wholesaler, she does not intend to open the storefront, instead using it as a workshop. Though she no longer ships her completed product internationally, she does send them throughout the United States to a variety of retailers.

Photo submitted
Skunks are a big seller for Townsend.

“Skunks are my bread and butter,” she explains.

Townsend does not like to hunt, and most of the furs she buys are from areas where hunters are providing predator control. Den catching in culverts is a common practice in the West, though illegal in Missouri. Townsend has received furs from a den of 18 skunks before, where hunters used carbon monoxide to euthanize the den and cause no damage to the furs. She also purchases furs from bobcats, raccoons, foxes, rabbits and other small animals, though she has preserved fish, birds, game heads, “and about everything” during her years of work.

Townsend does it all, skinning, fleshing, turning and tanning the furs. She even did trapping for a while. The wet-tanning technique she uses allows her to be creative and fix the animal in a variety of positions. She has fun with her work, adding hats, clothes and accessories. A raccoon with a fishing pole or playing a guitar are some of the popular items she designs.

“I do it for the satisfaction, start to finish. Getting help defeats the purpose,” says Townsend, who works from about 4 a.m. to 2 or 3 p.m. during the week.

As long as her hands hold out, she is not planning to retire for at least a couple of years. With about 1,000 animals recreated in her career, and with a year of orders waiting for her, Townsend Taxidermy is sure to be around as long as Townsend desires.