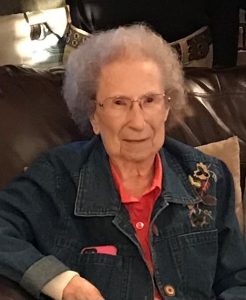 Louise Ella Akers, daughter of Ollie E. Williams and Grace Viola (Thomas) Williams, was born in Kinderpost, Mo., November 4, 1929. She went to be with the Lord on November 11, 2021, making her age at the time of her death 92 years and 1 week. Louise was raised by her mother and her stepfather, Bill Siddens, after her father died when she was a small toddler. Louise graduated from Licking High School in 1947. She taught school at Craddock School for a short time.

On March 31, 1951, Louise married James Thomas (Tom) Akers at the Methodist Church in Licking. Tom and Louise then lived and worked in St. Louis for many years. Louise did secretarial work for an insurance company in downtown St. Louis. Later she began doing secretarial work for David Ault who owned MARLO, a company that built cooling coils for the Department of Defense.

In their leisure time, Louise and Tom spent many enjoyable times going to and participating in square dances, traveling across the United States. Louise was also very involved in the Amaranth in St. Louis. When she and Tom moved to St. James, she was the founder of the Amaranth in Rolla. She established this charter in August of 2000. In April of 2021, Louise was honored and given the Unsung Hero Award.

Louise is survived by her sisters-in-law, Hazel Gerrard of New Bloomfield and Mini Akers of Licking; and numerous nephews and nieces that she loved and who loved her dearly.

Louise is preceded in death by her parents; her stepfather; her husband, Tom; and her only sibling, her brother, Ervin E. Williams.

A funeral service for Louise Akers was Monday, November 15, 2021, at 11 a.m. at Fox Funeral Home, 128 S. Main St., Licking, Mo., with Pastor Phillip McGuire officiating. A visitation will begin one-hour prior at 10 a.m. at the funeral home. Burial will follow in Licking Cemetery. Online condolences may be left at www.foxfh.net. Arrangements entrusted to Fox Funeral Home.