Our veterans were honored in a Veterans Assembly at the Licking High School Thursday morning, when students gave musical tributes and shared personal essays.

The Licking FFA began the assembly with the Posting of the Colors, followed by an opening welcome by Student Council President Winter Murray. Student Council (STUCO) members were the Masters of Ceremonies and the STUCO Outreach Team distributed the event programs.

All present joined in with salutes or hands over hearts in reciting the Pledge of Allegiance, led by Gracie Elledge. The LHS Choir led the singing of our National Anthem, “The Star-Spangled Banner.” Musical tributes, directed by Briana Link, continued with a performance of “I Lift My Lamp” by the choir and “American Fantasy” by the high school band.

Autumn Jackson shared her winning Patriot’s Pen essay on “How Can I Be A Good American?” and Aubri Tillery read her winning Voice of Democracy essay with her penned thoughts on “America: Where Do We Go From Here?” 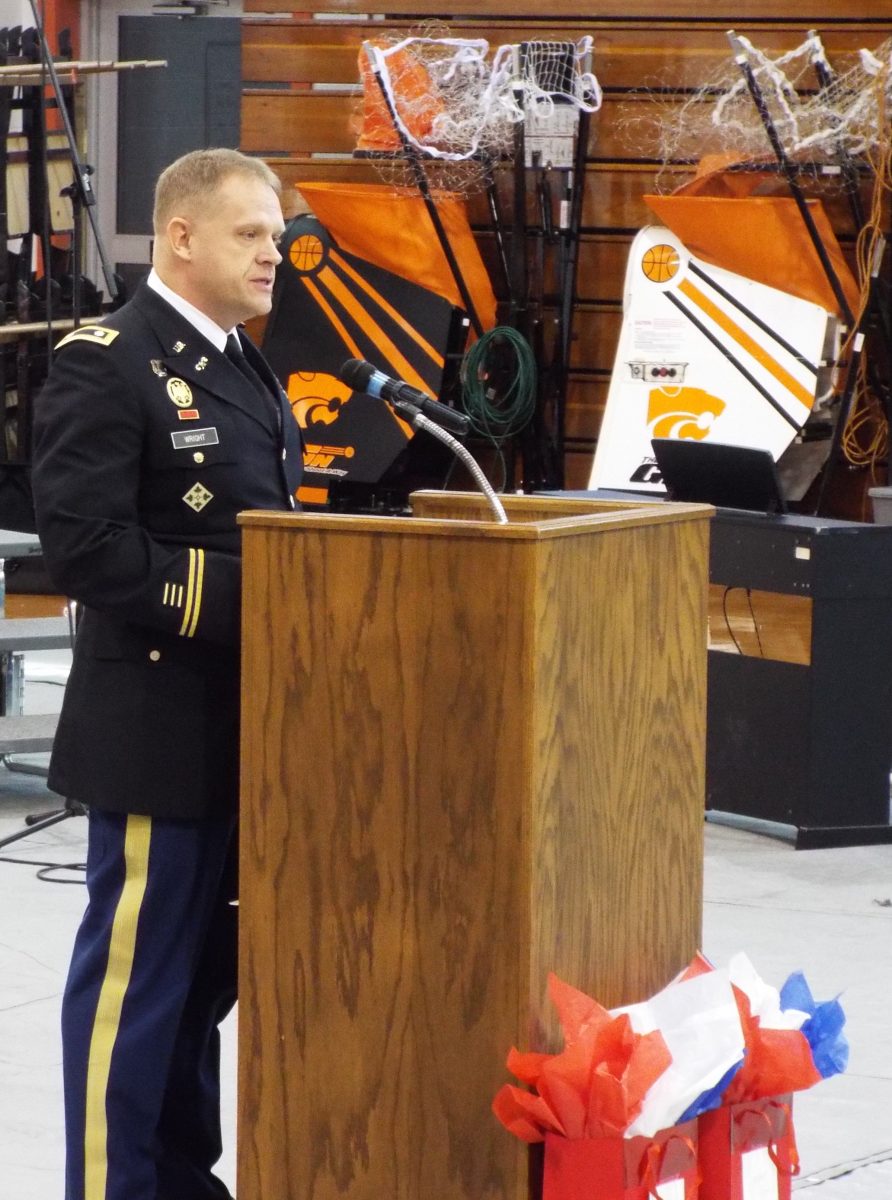 The guest speaker was Lt. Col. Ret. Glen Wright, a veteran of the U.S. Army who served 24-years and completed several oversea tours of duty. He recognized the veterans and their families in attendance and addressed the students. Wright shared what Veterans Day means and what it takes to be a soldier, summarized with the seven Army values: loyalty, duty, respect, selfless service, honor, integrity and personal courage. Standing solidly and with conviction, he then recited the Soldier’s Creed, memorized over 20-years ago and never forgotten.

All veterans were invited to stand and introduce themselves, sharing their military service, and their family members were also recognized for their ongoing support. 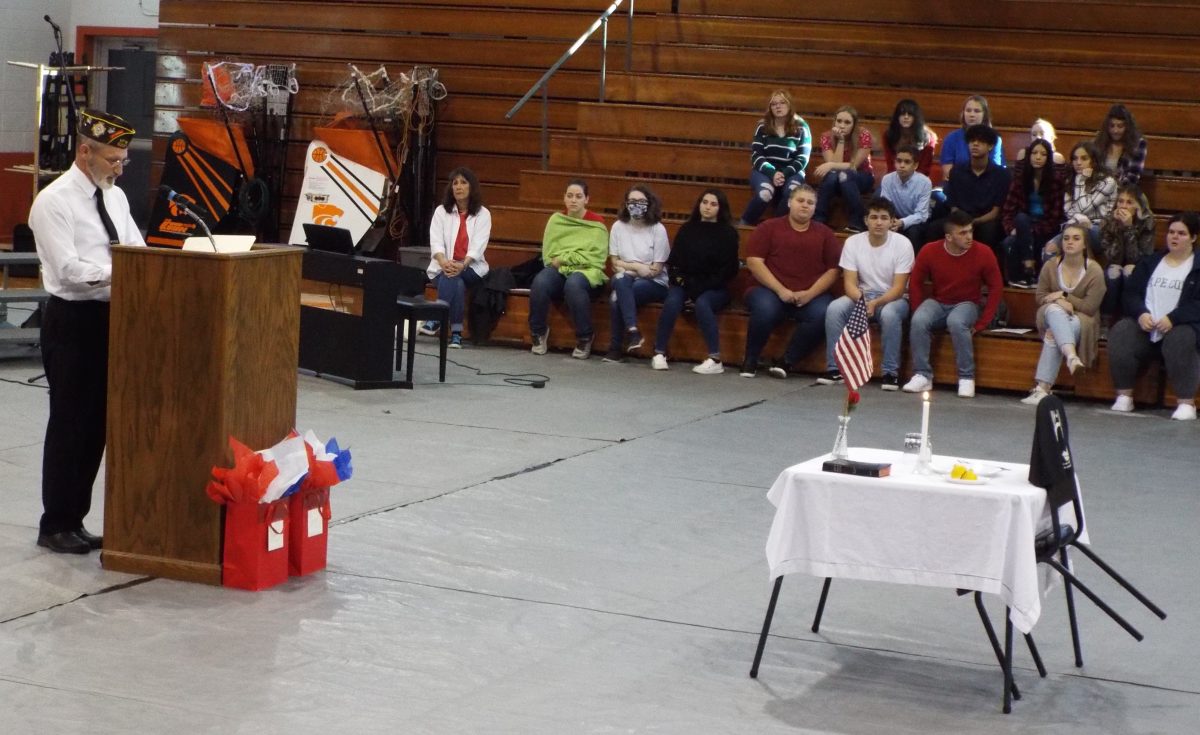 Guest speaker, veteran, VFW Post Commander and LHS ISS Instructor Billie Krewson spoke and shared the symbolism of all the items on the Missing Man Table in the middle of the gymnasium.

Taps was played by Emalee Breeden and John Tyree.

The veterans and their families enjoyed refreshments served by the FCCLA following the assembly. 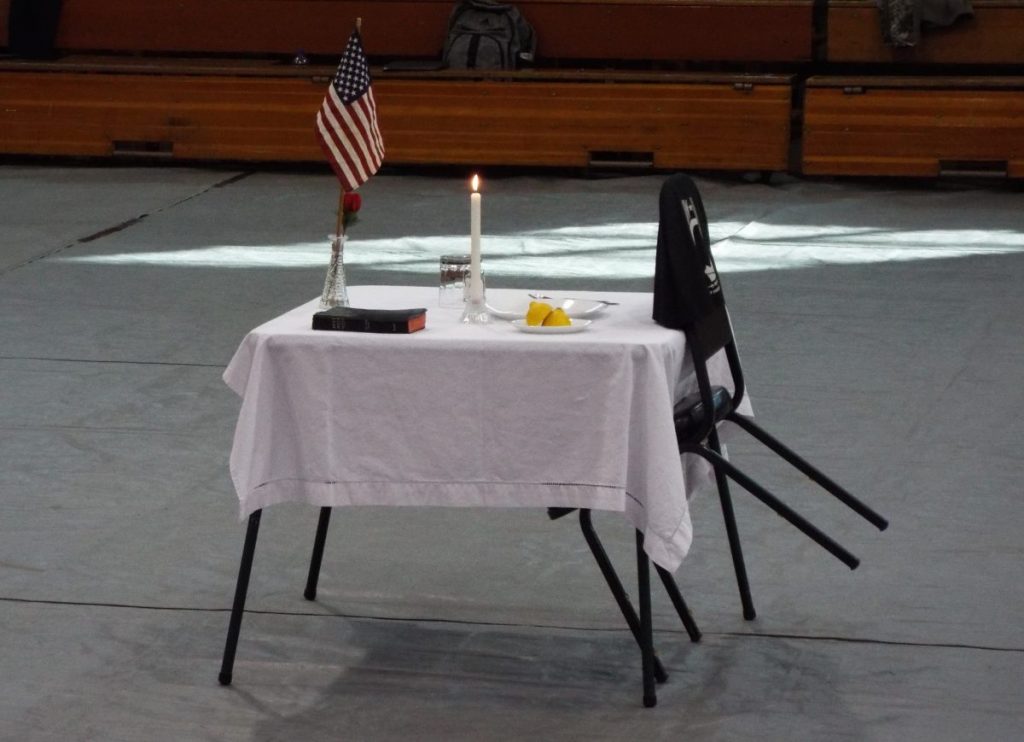 The small table is set for one symbolizing the frailty of one prisoner alone against his oppressors.

The tablecloth is white symbolizing the purity of their intentions to respond to their country’s call to arms.

The single red rose in a vase reminds us of the families and loved ones of our comrades-in-arms who keep the faith awaiting their return.

The red ribbon on the vase is reminiscent of the red ribbon worn upon the lapel and breasts of thousands who bear witness to their unyielding determination to demand a proper accounting of our missing.

The candle is lit symbolizing the upward reach of the unconquerable spirit.

A slice of lemon on the bread plate is to remind us of their bitter fate.

The Bible represents the strength gained through faith to sustain those lost from our country, founded as one nation under God.

There is salt upon the bread plate, symbolic of the families tears as they wait.

The glass is inverted; they cannot toast us this night.

The chair is empty they are not here.

Remember! Remember! Until the day they come home, Remember!