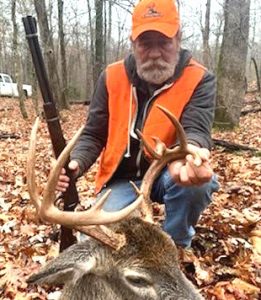 Steve is preceded in death by his parents; and one brother, Curtis (Moose) Mooney.

He is survived by his wife Brenda of Success; three sons, Christopher Mooney of Success, Tommy Gale, Jr. of Licking, and Stephen Gale and daughter-in-law Mandy of Licking; three sisters, Cheryl Housechildt and husband Frank of Eminence, Denise Hanson and husband Steve of Eminence and Lou Ann Mooney of Eminence; a sister-in-law, Sharon Mitchell and husband Melvin of Licking; eight grandchildren; and several cousins, nieces and nephews.

Steve grew up in the Eminence area and graduated from Eminence High School in 1977.

He married Brenda Gale on August 31, 1996, and to this union one son was born, Christopher.

Steve was a man of character and integrity, always willing to help others at a moment’s notice. His love of nature and wildlife was matched only by his love for family and friends. He was well known by those close to him as a skilled woodcraftsman and took pride in his ability to create beautiful art. He had an eye for finding value in everything around him and lived every day to be better than the day before.

Steve was a loving husband, father, grandfather and friend. He will be greatly missed by all who knew and loved him.

Services were Saturday, November 27, 2021, at 11 a.m. in the Roby Assembly of God Church. Brother Bob Troutt officiated with burial in the Allen Cemetery.