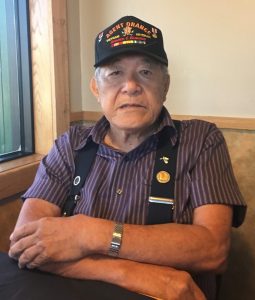 MSGT Sid Higashi, retired Air Force, of Success, Mo., passed away November 23, 2021, in Columbia Hospital, at the age of eighty-three. His wife, Mary Ellen, and stepdaughter, Elyse was with him via zoom camera several minutes before his Angel took him to his new home in Heaven. Sid was born in Stockton, Calif., June 22, 1938, to Sadaki and Aiko (Kuge) Higashi. He was preceded in death by his parents; brother, Michio; and sister, Rubie.

As a young boy of four he and his family were incarcerated in Manzanar Camp, Calif. due to being American Japanese because of December 7, 1941. Sid began his school years in this camp. Being a very young boy, with other little boys, they enjoyed throwing dirt clods at the soldiers who were guards. This family lived with many other families in this camp for several years and then released to journey to their homes.

In 1955 he spent six months in California Army National guard. At age 18, February 14, 1956, Sid enlisted in the Air Force where he served for twenty-one years. During his service years he was in Rescue Service and had three tours in Vietnam. He is accredited to saving fifty-two lives. He was a witness to spitting and being called a baby killer. He retired July 1, 1976, as a Master Sargent. He loved the military and tried to re-enter during Desert Storm, Iraq and Afghanistan, but was turned down. He was always sorry he retired so early. Sid loved his country and got so upset when he saw the American flag being burned, stepped on, or damaged in any way. He has flown the American Flag and all military flags in his front yard for years.

Sid attended Western Nevada Community College and received a degree in Applied Science in business, graduating in May 1980. He also attended American River College for two years and received his degree of Associates in Arts and a certificate of achievement in business management in June of 1984, in Sacramento, Calif. He was a certified substitute teacher, substituting at Success Elementary School and all grades at Houston schools.

Sid always had a job. After 11 years employment at McClellan Airbase in North Highlands, Calif., he and Mary Ellen moved to Missouri to help care for his mother-in-law, Mandy Venable and purchased a small farm in Success. He made sure she always had a birthday cake to treat her customers with from 1987 to 1999. They raised many feeder pigs and sold to the MFA Feeder Pig Auction. High feed prices ended this. Seeing an ad concerning Cackle Hatchery in Lebanon needing hatching egg producers he contacted the hatchery and got four hundred baby chicks to start another new endeavor. Then the hatchery mentioned they needed guinea eggs also, he got four hundred baby guineas to start this project. Daily gathering 100’s of chicken eggs and hunting guinea eggs as they dropped them wherever the guinea hen was ended these projects.

He was a taxicab driver on Fort Wood Army Base for seven years and a certified medical aide for the Lakes Residential Care facility that cared for twenty-nine mentally challenged adults in Houston, Mo., until it closed. He worked 10-years as a butcher for Dan Trentham Meat Processing Plant in Licking, until the plant was sold. He also served several years as a volunteer firefighter for the local fire departments. For many years he helped in making meatloaf for the Community Center dinner each month using twenty-five pounds of hamburger. Sid and Mary Ellen shelled black walnuts for Hammons with proceeds going to the local Community Betterment Association for 8-years. With his health beginning to change and due to using the hulling machine, Hammons thought it best for him not to hull.

In July of 2006, he was diagnosed with high-risk prostate cancer. He went through forty radiation treatments. In January 2008, with his doctors viewing his walking, they advised him to see a specialist and he was diagnosed with ALS which is a painful muscle disease. After doctors saw that his arms were so shaky that he couldn’t drink from a glass or feed himself at times, he was diagnosed with Parkinson disease also, all was caused by Agent Orange during his time in Vietnam. For therapy he started putting picture puzzles together, and all different puzzles, the 3D crystal and diamond art puzzles.

Sid was one who loved everyone, he was in bad health but didn’t like complaining. He always said, “I’m good looking on the outside, but my insides hurt constantly.” He was an avid collector of many things and loved collecting Angels and wearing Angel pins on his suspenders. He loved going to auctions and bringing home a box of “something” usually dishes, saying the box only cost me $2.

He loved his Palace Union Church and his church family, and loved to listen to and sing gospel songs. Alan Jackson being his favorite country and gospel singer.

Sid will be greatly missed for his funny wit and his tremendous love.

In lieu of flowers, the family would like donations to Roby Fire Department or the Roby Community Center, in Memory of Sid. Online condolences may be expressed at www.evansfh.com.

Visitation is Monday, December 6, 2021, from 11 to 12 p.m. at Evans Funeral Home, with Services beginning at 12 p.m. in the Chapel with Dennis Collins, Wesley Wallace and Stan St. Clair officiating. Inurnment with Full Military Honors is at 3 p.m. at Missouri Veterans Cemetery, Fort Wood. Services were under the direction of Evans Funeral Home.