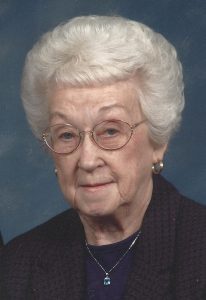 Vivian Lucille Fulks Smith was born on December 28, 1925, in Plato, Mo., to John Sherman and Lina Royster Fulks. On July 17, 1943, she married Doyle Smith. Vivian and Doyle enjoyed 70 wonderful years together. The majority of these years were spent in Licking, Mo. Vivian was preceded in death by her parents; her husband, Doyle; two infant children; and five siblings, Bonnie, Dale, Freida, Betty and Marjorie; and one grandson, Jeffrey Ary.

Vivian was a member of the Licking Church of Christ. She was a faithful member until her health prevented her from attending. Vivian enjoyed volunteering at the Sonshine and Rainbow Day School where she had the opportunity to help teach her great grandchildren as well as many others. She looked forward to preparing the tables and food for her church family for various church functions.

First and foremost, Vivian was a dedicated wife, mother and grandmother. She was very proud of her family’s accomplishments. She worked at the Rawlings baseball factory, Dunlap Grocery Store and Texas County Mutual Insurance. Later, Vivian and Doyle opened an M.F.A. Insurance office in Licking. In later years, she opened the Country Curl Beauty Salon, which she operated for eight years. Due to health issues, she closed her business and started a lifetime hobby of quilting. Her family will treasure the beautiful quilts that were hand-pieced and hand-quilted. Family weddings, graduations and other special events were recognized with one of her quilts. Vivian also loved to cook for her family and friends. She was admired for her hot rolls, chocolate pie and chocolate sheet cake. She was also well known and remembered for her well-kept yard which she continued to do into her nineties.

A visitation for Vivian was held on Saturday, November 27, 2021, from 6 – 8 p.m. at Fox Funeral Home, 128 S. Main St., Licking, MO. A funeral service for Vivian was held on Sunday, November 28, 2021, at 2 p.m. at the Church of Christ, 203 S. Main St., Licking, MO with Mr. Jim Bobo and Mr. John Edgar officiating. Pallbearers were Doug Smith, Brad Smith, Brady Smith, Dakota Smith, Dillon Smith, John Paul Ary and Josh Ary. Interment followed at the Licking Cemetery. In lieu of flowers, memorial contributions in Vivian’s name may be made to the Sonshine and Rainbow Day School at the Licking Church of Christ. Arrangements entrusted to Fox Funeral Home. Online condolences may be left at www.foxfh.net.