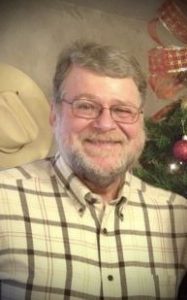 Randy was born in Rolla, Mo., on Sept. 21, 1952, to his loving parents Vera and Leslie Wade. He was raised with elder siblings Charolette and Scotty in Licking, Mo., where he graduated from Licking High School in 1970.

A big, caring heart and a sharp mind led Randy to a career in health care. After graduating from the radiology program at the Lester E. Cox Medical Center in Springfield, Mo., in 1972, Randy served as a radiologic technologist at Miami Baptist Hospital in Miami, Okla., and as radiology department director at Texas County Memorial Hospital in Houston, Mo.

Randy lived a colorful life, a testament to his love of adventure, the outdoors and having a good time. Among many other interests, he enjoyed floating the river, riding motorcycles and horses, off-roading, fishing, camping, shooting guns, playing pool, woodworking and laughing with family and friends.

In 2015, Randy moved from Licking to Tahlequah, Okla., to live near his daughter. After extensive illnesses, in May 2020, he became a resident of The Springs nursing home in Muskogee, Okla., until his death.

Randy is preceded in death by his parents, Vera and Leslie Wade; and grandparents, Addie and Coy Scott, and Bessie and Millard Wade, all of Licking.

At Randy’s request, in lieu of a funeral service a farewell float trip and cookout will take place on the Big Piney River to celebrate his memory and provide a fitting final send off.