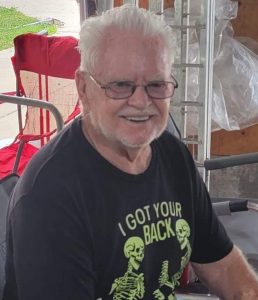 Tom grew up in Port Huron, Mich., and enlisted in the US Army in 1962. While stationed at Fort Leonard Wood, Mo., he met the love of his life Wilma. They were united in marriage in January of 1963, and celebrated forty-one wonderful years together. He was discharged from the Army in 1965.

Tom joined the Paper Hangers and Fresco Painters Local Union 2341 in February 1970 and has been a member since. He just received his 50-year service pin last year. He mostly worked in Ft. Leonard Wood and St. Louis, Mo.

Tom loved old cars, especially his ‘57 Chevy, which he spent countless hours working on and taking it to car shows as long as his health permitted. He was very proud of his car.

Tom loved spending time at the lake with his family, and showing us all “how to catch a fish” and how to “tie the hook” on. He always knew where the fish were biting.

One of his favorite things to do was “call us all on a Saturday morning at 5 a.m.” He called just to see what we were doing that day, to tell us of a treasure he would find at a garage sale or called to tell us that his deer, Buddy, was coming up to eat the chops that he put out for him and how close he got to him. Oh, how we are going to miss those calls!

Tom loved his family and would do anything he could to help them. He was a very special husband, father, grandfather and friend. He will be missed by all who knew and loved him. Forever in our hearts, Dad, until we meet again.

Memorials may be made to Craddock Cemetery. Online condolences may be expressed at www.evansfh.com.