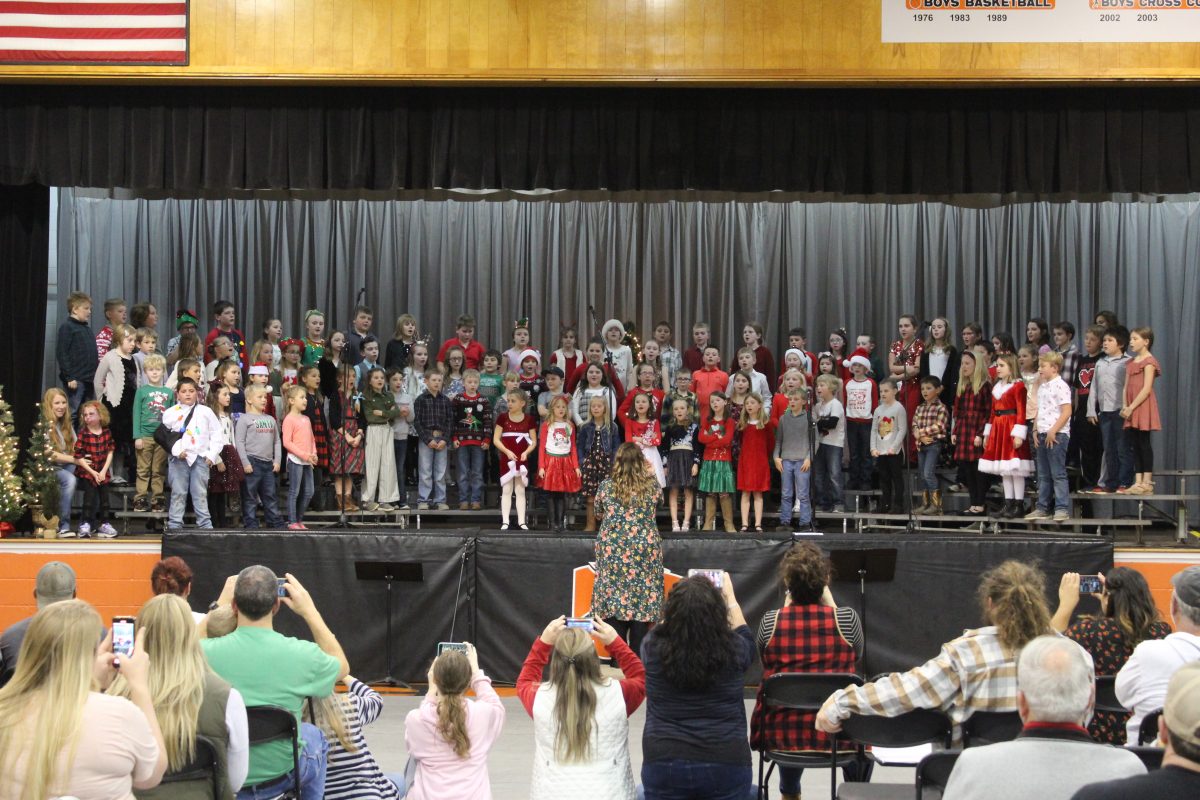 Photo by Shari Harris
After the younger classes were released early due to a tornado warning, second and third graders, shown above, performed “Dancer and Prancer,” “Here Comes Santa Claus,” and “Joy!”

Photo by Shari Harris
The sixth and seventh grade band performed three arrangements at the Licking High School Winter Concert. It was the first year for the sixth graders to play an instrument and the band performed very well.

Photo by Shari Harris
The LHS Concert Choir, fresh off a performance at the Missouri State Capitol the previous day, performed six selections at the LHS Winter Concert, including “Silent Night” during which the choir formed a semi-circle similar to the previous day’s performance of the song in the Whispering Gallery in the dome of the Capitol. Licking was the only choir of the many present allowed to perform a song in the Whispering Gallery. 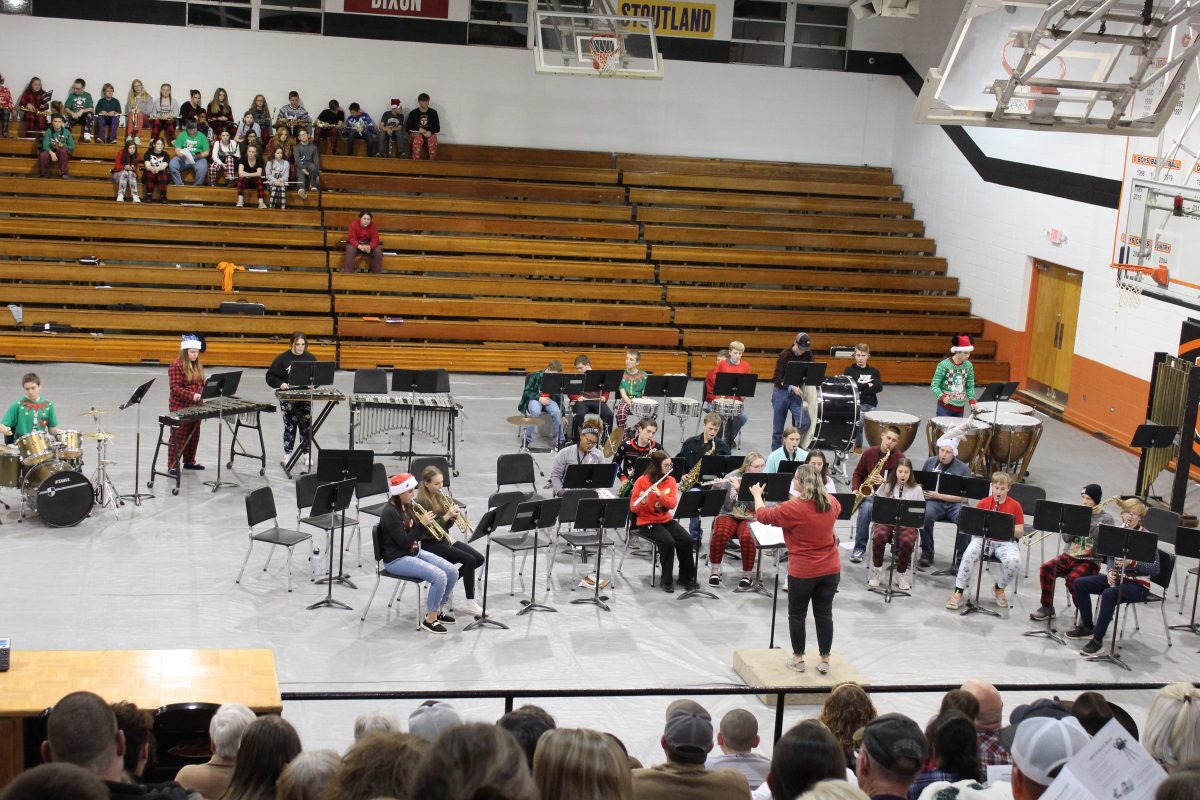 Photo by Shari Harris
The LHS Concert Band, consisting of 8th through 12th grade musicians, performed four arrangements related to movies, TV or stage, including “My Shot” from Hamilton, which featured the rapping talent of Oscar Phillips. They ended with three Christmas numbers.

Licking High School held its Winter Concert Thursday, December 9, followed the next evening by the Licking Elementary Christmas Program. All were well attended as families and the community gathered to hear the performances.

The sixth and seventh grade band led off the Winter Concert, performing three arrangements, “Angels We Have Heard on High,” “Up on the Housetop” and “Nicholas Variations.” Director Briana Link was very proud of the performances by her musicians in their first and second years with an instrument.

The 8th through 12th grade musicians compile the LHS Concert Band, and they began with four arrangements related to movies, TV or stage, including “The Avengers” from The Avengers, “Highlights from Grease,” the “Peter Gun Theme Song,” and “My Shot” from Hamilton, which included band member Oscar Phillips rapping the vocal portion of the song. The band also performed three Christmas numbers, “Christmas Time is Here,” “Jolly Old Sleigh Ride” and “A Christmas Proclamation.”

The LHS Concert Choir, fresh off a performance at the Missouri State Capitol the previous day, performed six selections at the LHS Winter Concert, including “Safe & Sound” from The Hunger Games, “Shallow” from A Star is Born, with soloists Ethan Domenech and Aubrey Gorman, and “All Star” from Shrek. They also performed three Christmas favorites, “Carol of the Bells,” “What Child,” and “Silent Night.” The latter was performed in a semi-circle similar to the previous day’s performance of it in the Whispering Gallery in the dome of the Capitol. Licking’s choir was the only one of the many choirs present at the Capitol that was allowed to perform a song in the Whispering Gallery.

The High School art students had their first semester artwork on display in the Field House for concert-goers to enjoy before and after the concert.

Despite a tornado warning that resulted in preschool, kindergarten and first grade students being released early to their parents, Friday night’s elementary concert was enjoyed by families and community members alike.

Mrs. Teresa Clonts directed the preschoolers in “Jingle Bells,” “Little Packages,” and “We Wish You a Merry Christmas.”

Elementary music teacher Kerri Chafin directed the remainder of the show, with speakers telling stories and jokes in addition to the musical numbers.

Kindergarten and First Grade combined efforts to perform “Hey Winter,” “He’ll Be Comin’ Down the Chimney,” “Jolly, Jolly Santa,” and “Christmas is Here.”

After the other classes were released, second and third graders performed “Dancer and Prancer,” “Here Comes Santa Claus,” and “Joy!”

The concert was completed with time remaining for the children to head home before the storm front reached Licking.