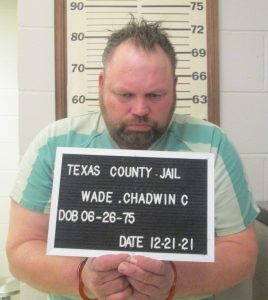 On the afternoon of December 21, 2021, Texas County Deputies responded to a report of an individual firing shots at people on Deason Drive in the Licking area. Upon arriving on scene, the deputies spoke with a male who stated he was leaving his residence with his wife and children in a buggy. The male stated a neighbor later identified as Chadwin Wade fired a rifle at them. The deputies made contact with Wade and he admitted to shooting the rifle at the family in the buggy. None of the people in the buggy were struck by the gunfire.