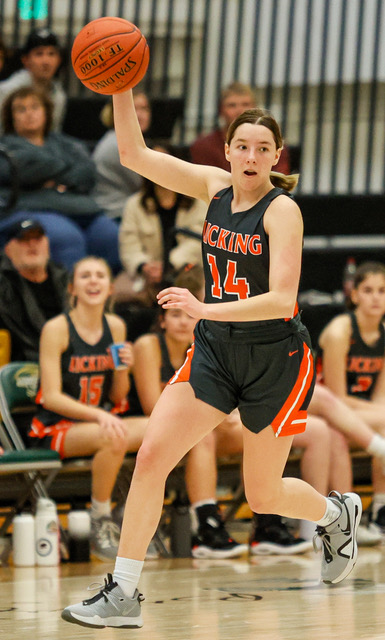 Photo courtesy of Donald Dodd, Salem Publishing Company, Inc.
Licking senior Kylie Taylor scans the court in the first round game against Truman. Taylor was named to the All Tournament team.

The Licking Lady Wildcats made the trek north for the Annual Rolla Christmas Tournament. This year the Lady ‘Cats received the 6th seed in the eight-team tournament.

Licking faced Truman (Independence) in the opening round for the second year in a row. Unlike last season, the girls came out on fire and rushed out to a double digit lead in the first quarter. The second was much of the same as Licking executed their zone sets to perfection to take a 16-point lead into halftime.

Truman came out in the second half a different team. The Patriots used their athleticism and speed to hinder the Lady ‘Cats on offense and gradually clawed back into the game, cutting the lead to four late in the fourth. A big basket on a post up by Abbie Sullins and some free throws by Kiley Ingram and Kylie Taylor helped Licking hold on and win 46-41 against a legit class 6 opponent.

Taylor led all scorers with 20 points; Ingram posted a double double with 11 points and 10 rebounds; Sullins had 9, Hannah Medlock 5 and Kaeda Cook 1.

“I knew from film that we would have an opportunity to build a lead early before Truman would pressure us. The girls executed our defensive game plan very well and we were able to do just enough late to get the W and avenge last years loss.” – Coach Rissler

Licking faced the highly touted Fatima Lady Comets in the semi-final round. The game was back and forth throughout the first quarter until Fatima caught fire. The Lady Comets made seven of their next 10 attempts from three-point land and broke the game open. Licking trailed 22-43 at halftime.

The girls were able to make a run and cut the lead back to 14 but two more threes from Fatima pushed the lead back to 20 going into the fourth quarter. Fatima cruised to a 59-33 victory and gave Licking their first loss of the season. Sullins led the scoring with 11 and Medlock chipped in 6.

Licking drew class 5 North County from Bonne Terre in the third place game. The Lady ‘Cats did not start well as North County’s 6’3″ senior center scored 12 in the first quarter. Licking got down as much as 17 in the second before a late run and cut the Raider lead to 10 at the break.

The ‘Cats treaded water in the third quarter and trailed by 11 with one quarter to play. The fourth quarter is where the girls came alive. Sullins hit back to back threes to give Licking a 51-50 lead with three minutes to play. NC pounded it inside and took the lead back but a bucket by Taylor off a shuffle cut tied the game at 54 with 20 seconds remaining. NC got the ball underneath their basket with 12 seconds to play. Licking went to the “Schofield” defense with Sullins and Ingram on the ball to try and keep it out of the big girl’s hands. The inbounds pass was a high lob to the FT line. As the ball was being passed out of the high post, Taylor got a hand on the ball and chased it down near half court. Medlock was out in front and Taylor calmly hit her for a layup with about four seconds left to give Licking the lead for good. NC was out of timeouts and couldn’t stop the clock.

Senior guard Kylie Taylor was named to the All Tourney Team. She averaged 13.7 ppg, 4.7 rebounds, 3.7 assists, and 3.0 steals over the three games.

“This was a great win for the girls to end the 2021 year. We played three good teams in three days and headed back south with a trophy.” – Coach Rissler