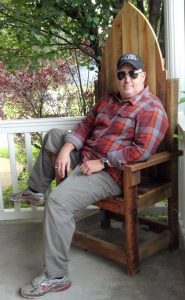 Alan Michael Rodts, age 58, originally of Mishawaka, Ind., passed in peace in the early hours of January 5, 2022, surrounded by family.

“Al,” as he was known to most, was born January 12, 1963, to Minniedell (Vollmer) and Alfred Rodts, and attended LaVille High School before serving in the U.S. Army for 20-plus years. Al served in the 82nd Airborne, 3/504 Pathfinders Division, and headed a multitude of both domestic and international historic achievements as a decorated Jumpmaster, Infantryman and Drill Sergeant.

Al was a dedicated member of Saint Marks Catholic Church in Houston, Mo. He received Christ as his Savior, and remained faithful throughout the years, eventually serving as a Grand Knight with the Houston, Mo., Knights of Columbus Council 12650. His service extended outside of the church, including serving as the Vice President of the Pregnancy Resource Center of South-Central Missouri and former Station Captain of the Roby Fire Department-Evening Shade District.

Al’s most prized hobbies included that of flying, scuba diving, and transforming everyday objects into extraordinary works, among many others. It can be said that once he conquered land, sea, and air, he moved on to his one true passion: dad jokes.

He will be remembered for his unwavering faith, wildly (or mildly) entertaining stories, infectious laugh, affectionate smile and loving heart. To know him was a gift. He was a wonderful husband, father, grandfather and friend. He lived each day for God and his family, and will be greatly missed by all who knew and loved him.

In lieu of flowers, donations are suggested to the Pregnancy Resource Center, or St. Marks Catholic Church. Online condolences may be expressed at www.evansfh.com.