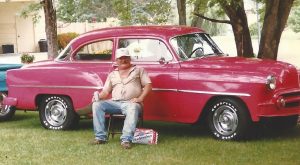 In 1957 or ’58, he was baptized at the First Southern Baptist Church in California. As a young boy, Bill moved around to many states. In Alabama, he picked cotton alongside his brother, Bob. He went to Redondo High School in Redondo Beach, Calif. In his youth, he was a Duncan yo-yo champion. He loved art, which he was very good at. He put models together, and made his own skateboards and road bikes.

Bill, Bob and Kay were very close, and this stayed that way throughout adulthood. Bill and Bob taught Kay how to box. He made lots of fond memories with the Dalton family in California, who he stayed in contact with all these years.

Bill became a pastry chef and worked his way up to Maître d’ at the Velvet Turtle Restaurant in Redondo Beach. He liked riding his motorcycle on Hollywood Blvd, and a California Highway Patrolman gave him his first helmet, one that all the motorcycle officers wore. When Bill came back to Missouri, he worked and lived with Uncle Del and Aunt Dorothy, where he worked with Uncle Del logging and farming.

Bill and Bob Green coached Little League baseball for quite a few years; at that time the team was the only team undefeated two years in a row. “That’s a fact, Jack.” He was a member for years of the Fraternal Order of Eagles. Bill loved his old junkers and would sit around for hours talking about them. If he thought it was a cool car, he would say now that’s one cool car. Bill was one of the founders of the Wheels & Deals Car Show. He loved old rock and roll music and throwing a good party with Sandy. He loved handing out candy on Halloween. Bill worked many jobs, from building houses with Lonnie Sullins to pouring concrete.

Bill loved going to the Floyd Family Reunions to see all his family and have a good time with them. He loved Aunt Wanda’s chicken & dumplings.

“Long story short.” Bill was very proud of the Licking United Community Help Center that he built with the help of many volunteers. He wanted and would help people that needed help; this was throughout his life.

Services will be held at Fox Funeral Home on Friday, January 14. Visitation will begin at 10 a.m. and continue until the Service at noon. Interment will be at Boone Creek Cemetery. Eric Jones will officiate.

Memorials can be sent to St. Jude in memory of Bill.