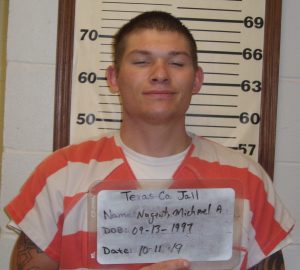 Michael A. Nugent, 24, was sentenced on Friday, January 4, to life in prison without possibility of parole. Nugent was convicted of first-degree murder, unlawful use of a weapon and armed criminal action in October, 2021, for the shooting death of Crue D. Ridenoure of Willow Springs.

On Oct. 10, 2019, the Texas County Sheriff’s Office received a report of a male subject who appeared to have a gunshot wound lying at the intersection of Hwy. 17 and Rte. W in the Midvale area. The victim, Ridenoure, was able to provide information to first responders about the incident and then was transported by ambulance to Texas County Memorial Hospital, where he was later pronounced deceased.