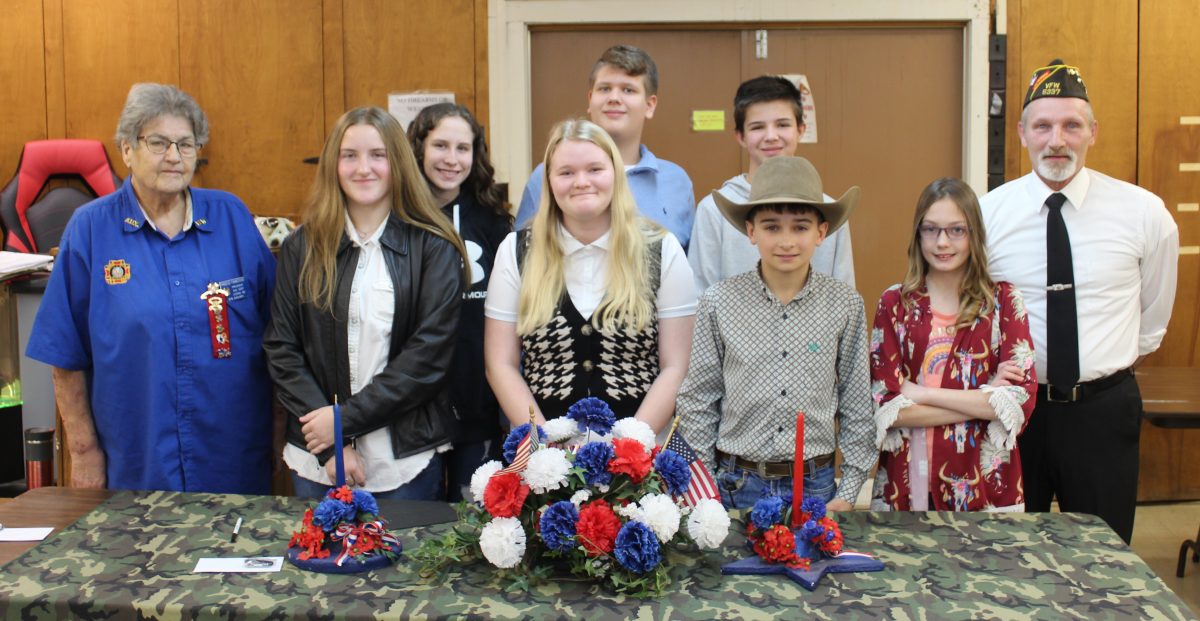 Following the meal VFW Commander and VOD Chairman Billie Krewson made the awards ceremony introductions, and while all could not be present, recognized committee members, faculty and principals.

“We are planting seeds of patriotism in these young people as a way of helping America grow,” said Krewson after participating in this year’s awards ceremony.

The Voice of Democracy audio-essay first place winner from grades 9 – 12 was Aubri Tillery, a Licking High School junior; she won $200 and advanced to district competition. Tillery could not be present, however Krewson presented her essay. She addressed the Voice of Democracy theme – “America: Where do we go from here,” by quoting statistics of where we are now, have been in the recent past, and the issues that need to be addressed for our country to move forward.

“When we are asked our standings on politics the answer should not be red or blue; the two-party system has divided and deceived this country. We can never move forward if we are living in the past,” stated Tillery.

She continued, “We must as American citizens do our small part in the shaping of the future of America. We can be the tools of change.” Tillery further summarized, “America was built on selflessness and now we stand on the shaky foundation of selfishness. Where will we go from here? That depends on the actions of us, people united.”

While judging must have been difficult from a total of 47 entries, Patriot’s Pen essay winners from grades 6 – 8 were as follows:

Patriot’s Pen winners presented their essays, with the exception of Floyd and Colman who were not in attendance.

Patriotic key points made by Patriot’s Pen winners on their theme – “How can I be a good American,” included:

“…treating others with respect, appreciating what I have, and seeing the good in others;”

“by giving my intellect, my love and my life;”

Quoting a veteran and in agreement, “pride in my country and doing the right thing, even when nobody’s looking,” also quoting what soldiers live by: loyalty, duty, respect, selfless service, honor, integrity and personal courage.”

Other comments included, “making educated decisions and …being a good American because it can make a difference in our world;”

“as Americans, we all have rights and responsibilities; ”

“Just by being respectful, helping the environment, and bringing people to Christ, I am making a difference in the world.”

Many acknowledged our founding fathers that set the guidelines, our veterans for protecting those guidelines and our country, and we the people, who should appreciate what has been done and do our personal best to be a good American.