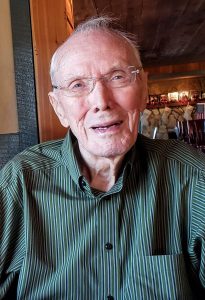 He is survived by his son and daughter-in-law, Gregory S. Wilson and Elena Parsons-Wilson of Lutz, Fla.

The youngest of four brothers, Sidney grew up on a farm. He would walk some distance to school, occasionally arrive by horse, or be fortunate to hitch a ride. He graduated from Licking High School in 1939. His first job was as a teacher in a one-room schoolhouse in rural Missouri. While assisting his father as a farm hand he was called to serve in World War II. He joined the Army in 1942 and received training in both Tampa and St. Petersburg. As an airplane armorer he would earn three Bronze Service Stars for campaigns in the Pacific and be honorably discharged from the Army Air Force in 1946 with the rank of Sergeant. 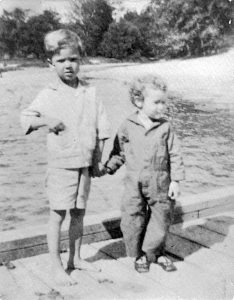 Long before, when he was six years old, Sidney was photographed standing on a bridge near the mouth of the Current River holding hands with three-year-old Bettye Stewart. In 1946, upon his return from the war, they were married in St. Louis. They would visit that same bridge each year for more than five decades.

Sidney began working for the Ralston Purina Company in St. Louis and northern Illinois before accepting a transfer to Tampa in 1949, where he continued to work until his retirement in 1981. Sidney and Bettye moved to Davis Islands (Tampa) shortly after their only child, Gregory, was born. In 1969 they moved to St. Petersburg Beach, where they owned and operated two shoe and resort wear stores for 22 years. They returned to Tampa to reside at University Village in 1996. Bettye passed away in 2004. In 2006 Sidney married Patricia Kinsella, who passed away in 2019.

Colleagues, employees and customers knew Sidney for his integrity, his quiet and warm demeanor, and his humor. It is no exaggeration to say he was warmly regarded, if not loved, by everyone he met. He enjoyed being with friends, especially a group of four couples who traveled twice yearly from the opening of Disney World in 1972. Sidney traveled the world with his wife, enjoyed attending his military reunions throughout the United States, and dutifully celebrated Gasparilla with friends every year until 2020.

In the last five years of his life, Sidney lived with his son and daughter-in-law, who moved to Lutz to care for him. He enjoyed visits with his wife, Patricia, who lived in a nearby nursing home, drives in the countryside with Gregory and Elena, as well as visits from family and friends. Life was made immeasurably easier with assistance from the James A. Haley Veterans Administration Hospital. At 99, he experienced one last Christmas dinner, champagne on New Years Eve, and then he passed away peacefully in his sleep nine days later.

Sidney will be buried with military honors at the Florida National Cemetery in Bushnell, Fla., on Monday, January 31.