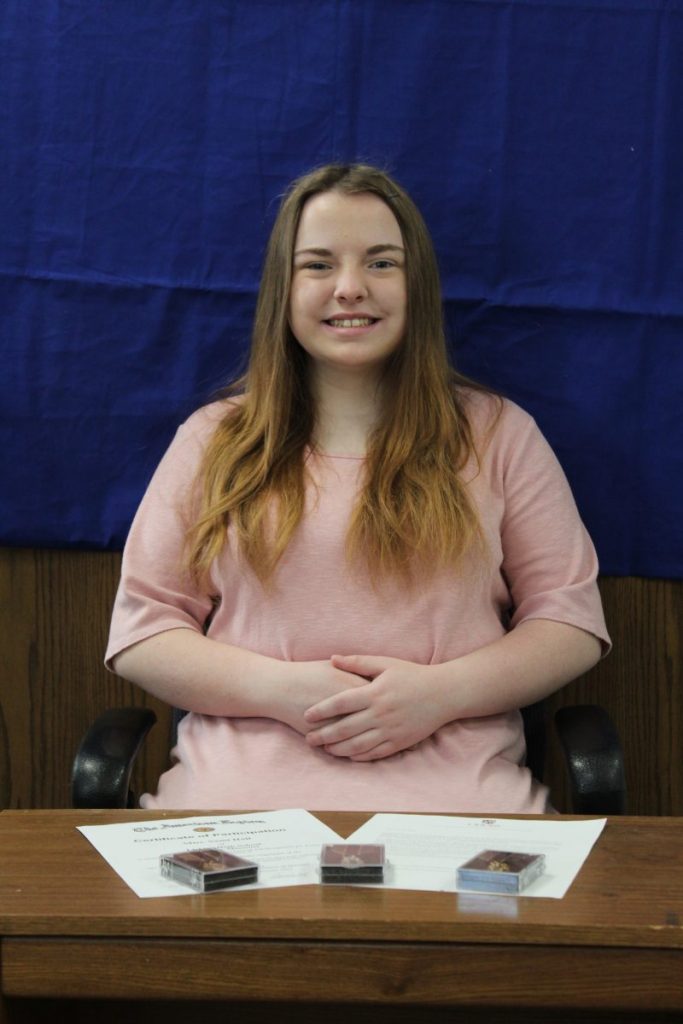 Photo by Shari Harris
Sami Hall, a sophomore at LHS, has collected a variety of medals, certificates and awards in the first three levels of the AL Oratorical Contest.

Licking High School Sophomore Sami Hall has qualified for the state level of competition in the American Legion Oratorical Contest for high school students. The purpose of the contest is to develop knowledge and appreciation of the United States Constitution.

Hall was awarded a bronze medal when she won the county contest, sponsored by American Legion Post #41 of Houston. A silver medal and a $350 scholarship were awarded for winning the District #16 contest. Drury University awarded a $16,000 per year scholarship to accompany her gold medal for winning the zone contest January 23.

Hall is preparing for the state competition at the end of February. Her prepared speech must be lengthened from 5-6 minutes to an 8-9 minute presentation. In addition to their primary oration on the Constitution, contestants must be prepared to speak on one of four amendments, with the amendment number drawn the day of the competition.

Hall’s primary oration is “The Unseen Statue.” She compares the Constitution to the Statue of Liberty. Hall shared that there is more access to our Constitution than ever before, but it feels like less care is taken to learn and understand it.

“We need to consider how, historically, our interpretation of the Constitution will be looked at,” Hall said. “We should think about our legacy.”

Hall credits Mr. Cole Roark, her American History teacher, and Mrs. Suzie Blackburn, her elementary history teacher, with fueling her interest in history. Her father has a degree in history and her mother is very interested in learning, and they have encouraged her in her pursuits. Experience gained in the 4-H Public Speaking Club has also served her well.

Hall is the daughter of Cindy and John Hall of Licking. She hopes to pursue a degree in nursing when she graduates from LHS.