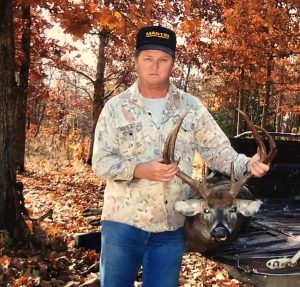 Jackie “JD” Bays, age 60, son of Jackie Dean Bays and Opal (Elliott) Myres, was born on November 29, 1961. He passed away on February 2, 2022, at Barnes Jewish Hospital with his wife and daughter by his side. JD was a caring husband, father, grandfather, brother and friend.

JD is preceded in death by his father, Jackie Dean Bays; grandparents, Sam, and Ollie Elliott; an uncle, Harold (Hankey) Elliott; and a sister, Wendy Myres.

He graduated from Plato High School in May 1979. He worked for Fariel Garrett for several years on his farm. He also worked for Koss Construction as a foreman on a road crew for 20 years and for APAC Construction for five years until his health started to fail. Beginning in 2014, until his health recently declined, he helped his family with anything he could.

JD married Linda (Barton) December 2, 2001; they spent 27 years together and enjoyed 20 happily married years. He enjoyed spending time with his mother, daughter, grandchildren and many nieces and nephews. He became an excellent cook and even learned to bake. He was always trying out new recipes and cooking dinner for his wife on the days that she worked. JD loved long walks in the woods with his fur babies, Daisy, Ellie and Molly and always took them wherever he went. He always enjoyed when his daughter and family would come for a visit. They would always end up on an adventure and come home with a story to tell. He loved to go dancing with his wife and attending Rendezvous; that was always a favorite time for them both. JD loved date nights, and going to flea markets with his wife Linda. He enjoyed spending time with his nieces and nephews and anytime they would call and ask to go swimming he would drop everything to take them. He loved having the grandkids over for the weekend and taking them on any adventure they could think up.

He was baptized October 6, 2013, and a member of Hickory Ridge Baptist Church. He loved his church family and telling people about his faith.

Family respectfully suggests that donations be made to the JD Bays Memorial Fund C/O Evans Funeral Home, in lieu of floral arrangements. Online condolences may be expressed at www.evansfh.com.