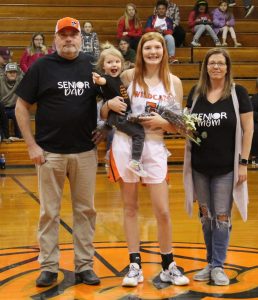 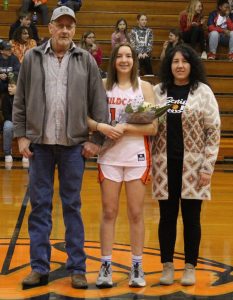 Lady ‘Cats seniors and their families were honored on Senior Night. Left is Kiley Ingram with parents Jason and Cassi Ingram and daughter, Harper. Right is Kylie Taylor with parents Jerry Sullins and Terry Moncrief.

The Licking Lady ‘Cats celebrated their two seniors on Wednesday, Feb. 9, after their conference win over Stoutland.

Kiley Ingram is the daughter of Jason and Cassi Ingram, and the mother of Harper Ingram. She is involved in Lady ‘Cat Basketball and Volleyball, PEP Club, National Honor Society (Secretary), and Health Occupations Students of America (HOSA). She plans to attend Westminster College in Fulton, where she will play basketball and study nursing.

Kylie Taylor is the daughter of Terri Moncrief and Jerry Sullins. She is involved in Lady ‘Cat Basketball and Volleyball, and Club Chaos. She plans to further her volleyball career while studying to become a teacher/coach.

Coach Steve Rissler was able to work his starters and his bench during the Stoutland game, often substituting five players at a time, and Licking rolled to an 85-38 win over the Lady Tigers in their last home game of the season.

The Lady ‘Cats wrapped up their week with a Thursday night win in Thayer over the Lady Bobcats, 66-48.

District tournament brackets have been released, and Licking is seeded number one. On Monday, Feb. 21, at 6 p.m., they will play the winner of the Saturday, Feb. 19, Thayer v. Mtn. View game. Mansfield will play the winner of Saturday’s Hartville/Houston contest on Monday at 7:30 p.m. The winners of Monday’s games will meet for the District Final at 7 p.m. on Thursday, Feb. 24. District games are being held in Houston this year.