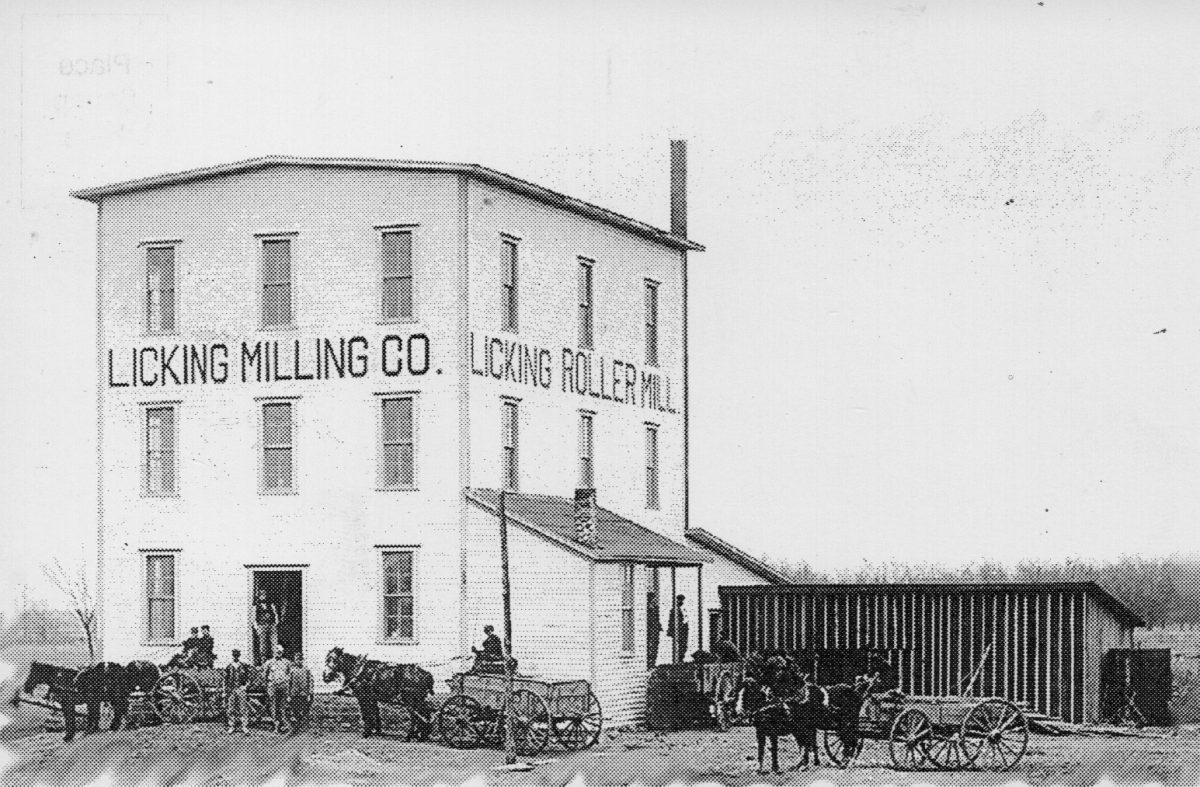 Photo from The Licking News archives

“The Licking Milling Company was organized in 1882, with J.L. Campbell, J.A. Craven and B.F. Craven. That year a mill building was erected with three run buhrs, and a (daily) capacity of forty barrels. W.A. Freeman purchased the interests of the Craven brothers, and in 1886 William Ray purchased a fourth interest, and in 1888 another fourth, being now one-half owner. In 1887 the roller process was introduced, giving a (daily) capacity of sixty barrels. This industry gives employment to three men, the material being supplied from the rich country surrounding. The old buhrs are retained for corn work.” – From Goodspeed, 1889

Millers August Earl Hesse and Vernon Hesse were the last to operate the mill. The mill ran day and night circa 1933 to 1940. They quit making flour and meal in 1940, at which time it became a farm supply business. (The doors closed in 1973.)

During its long tenure The Licking Milling Company would be a center hub of activity and necessity for the Licking community as well as surrounding areas.

The Licking Community Betterment Association was established in the early nineties and the association began restoration on the Licking Mill. Area businesses and community members helped with finances and labor for the resurrection of the deteriorating landmark. Millwright Phil Robertson from Indiana recommended a three-phase project including preservation, repairing the steam engine and restoration of the mill, summarizing his report by saying, “The Licking Mill should be preserved. It is a significant historical artifact.” A 1994 summer opening was planned.

Licking Downtown, Inc. acquired the Licking Milling Company Building and much of the original equipment in 2009. Again repairs were made to reverse the building’s deterioration and to get the mill functioning.

July 1, 2010, The Licking News reported, “Licking’s historic mill was fired up for the first time since World War II Saturday at the First Annual Licking Mill Festival,” and it was “fired up again” as reported on September 22, 2011.

Licking Downtown, Inc., announced the establishment of The Licking Milling Company Society in February 2019 to continue the restoration began by the Licking Community Betterment Association. The goal again is to fund repairs, maintenance and improvement for preservation of the mill. The society will also plan activities, community events and learning opportunities. The future goal is to get the rollers up and running and restore cornmeal grinding.

The Licking Mill, standing three stories tall and full of original mill machinery, including the steam engine, is 140 years old this year.