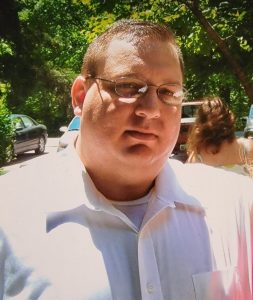 Jason is preceded in death by his grandparents, John and Grace Luck of Houston, Mo.

Jason is survived by his parents, Rhonda (Luck) and Vaughan Hutsell of Licking and Robert and Helene Ryan of Bolivar; his sister, Tiffany Wood and her husband, Chris of Rolla; his niece, Addison Mae Wood; and his girlfriend, Melissa Miller of Licking.

Jason was born on January 31, 1977, at Texas County Memorial Hospital in Houston, Mo. As a military brat, Jason grew up traveling with his family and attended several different schools in various states and a few countries. Jason spent his teenage years in Licking, where he graduated from Licking High School in 1995. After attending college, Jason went on to be employed at the South-Central Correctional Center in Licking. Later, he obtained his CDL license and enjoyed a career as a driver with FedEx Freight, a job where he made many friends.

Jason loved spending time with his family, especially his niece Addison, and his friends. He enjoyed playing games with his aunts and family, going to the firing range, attending sporting events, rooting on the Tampa Bay Buccaneers and the Houston Astros, collecting Star Wars memorabilia and watching movies.

Jason was a beloved son, brother, uncle, nephew and friend. He had a big heart and was always looking for ways to help his family and friends. Jason was saved and baptized in 1989 at Burrows Memorial Baptist Church in Norfolk, Va.

Jason will always be in our hearts and will be remembered for his sense of humor, his giving spirit, his loving nature and his big smile. He would always go out of his way to make someone laugh and feel loved. Jason was loved so much by so many, and there was never a day his mother didn’t tell him she loved him. Jason will be missed dearly by all who knew him.

In lieu of flowers, family suggests donations be made to Ozark Cemetery. Online condolences may be expressed at www.evansfh.com.