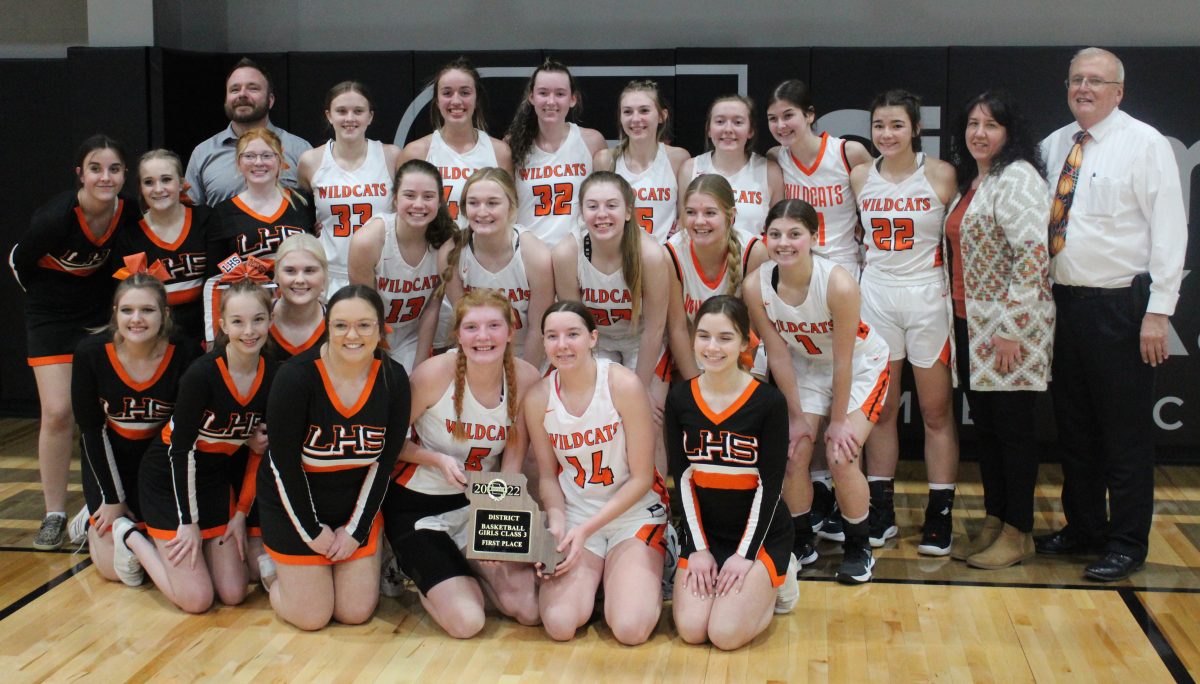 Photo by Shari Harris
Licking Lady Wildcats Basketball players, coaches and cheerleaders kept fans on the edges of their seats at the District final game. The Lady ‘Cats are Class 2, District 10 champs.

Despite a tough first half, the Licking Lady Wildcats outscored Mansfield 17-6 in the fourth quarter to win the District 10 championship game, 50-45.

Defense ruled in the first quarter, and the Lady ‘Cats’ shots were cold. Kiley Ingram finally broke through with about three minutes to go in the first, putting Licking on the board with two points. At the end of one, it was a 6-9 game for Licking, with five team fouls to Mansfield’s two.

The second quarter saw Mansfield get hot, while Licking shooters continued to struggle. Fouls continued to mount on the Licking side of the scoreboard. By halftime, Licking trailed 19-28 and led Mansfield 10-7 in fouls. Kaida Cook’s shooting heated up for the Lady ‘Cats, keeping them from a double-digit deficit.

Licking came out of halftime with better shooting and fans could see the momentum begin to shift. Team fouls were down as well. Hannah Medlock connected with two three-pointers to close the gap, 25-30, then Ingram had a run of three two-point shots. But Mansfield was still scoring, and Licking trailed 33-39 with a quarter to go.

Abbie Sullins tied it up with a three-point shot with 5-1/2 minutes to go in the game, and Cook was able to move Licking into the lead a couple of plays later with a free throw, 43-42. Sullins hit for two more points, then Cook completed two free throws for a 47-42 lead. Mansfield called a time out with 1:03 on the clock, then hit a three-pointer to make it a two point game. Ingram’s free throw made it 48-45 with 38.8 seconds. Mansfield missed their next shot and fouled Medlock on the rebound; she missed the front end of a one and one. Mansfield rebounded and came roaring down the court, but a whistle for a charging foul stopped their attack. With 20.6 seconds to go, Sullins was fouled and made two, making the score 50-45. Mansfield was unable to score again, held to only six points in the fourth.

Licking advances to the Sectional round of the State Tournament versus District 9 champion Steelville. The game will be at Missouri S&T in Rolla, Wednesday, March 2, at 6 p.m.