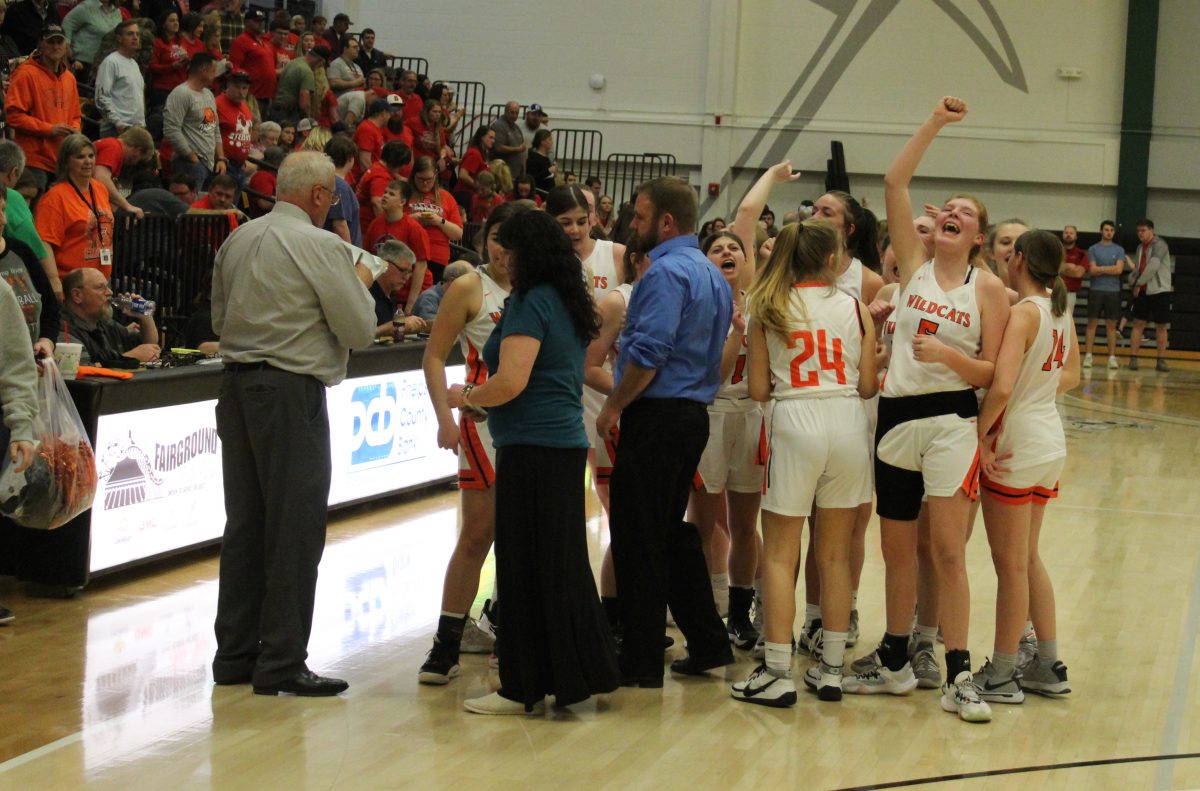 Licking’s Lady Wildcats basketball team took on the Steelville Lady Cardinals Wednesday, March 2, at Gibson Arena on the campus of Missouri S&T. The Sectional game between District 10 champion Licking and District 9 champion Steelville was decided by a single point, with Licking advancing to the State Quarterfinals, 50-49.

Kiley Ingram put the first two points on the scoreboard near the end of the first minute of play. It took another two minutes for the next score, this one a two-point shot by Steelville. They didn’t stop there, connecting with two three-pointers, prompting a Licking timeout with 2:48 left in the first quarter, and 2-8 on the scoreboard. Back on the floor, Abigail Sullins shot a three-pointer and Kaida Cook added two, equaling a two- and three-pointer by Steelville and ending the quarter with a 7-13 deficit.

Licking warmed up in the second quarter, with two points by Cook and three by Sullins closing the gap to 12-13. Another two by Sullins put Licking on top, 14-13, then her three-pointer led to a Steelville timeout. Lady ‘Cat scoring was all Hannah Medlock for the rest of the quarter, as she connected two two-point shots and a three-pointer to bring Licking’s score to 25 points. But Steelville countered with a pair of three-pointers and three two-pointers, and the score was tied going into halftime.

Kylie Taylor hit a three-pointer to start second half scoring, then a steal led to two more points for the senior guard. Steelville came back with a two-pointer, then fouled Cook under the basket, and she hit a free shot to make the lead 31-27. Cook followed with a two-pointer, which was matched by Steelville. Medlock hit a three then Cook made another two. At the end of the third quarter, the Lady ‘Cats led 38-29.

The fourth quarter started with Sullins getting fouled on a shot down low in the paint. She hit one of two free throws, but Steelville replied with a baseline shot from three-point range – 39-32. It was a battle for the next minute and a half with no scoring, then Steelville called a timeout with 5:26 in the game.

Medlock was the first to score after play resumed, hitting a three at 4:40. More than a minute later, senior Ingram added two points at the 3:20 mark. Steelville was able to connect with two three-pointers then called timeout with 2:24 remaining, score 44-38.

Back in action, Ingram connected for another two, but Steelville answered with a three and Licking’s Coach Steve Rissler called timeout with 1:20 remaining and Licking leading, 46-41.

Steelville worked the clock for the rest of the game. They fouled Cook, who hit both shots, making it a seven point difference. The Lady Cardinals scored two, then fouled Taylor who connected with one; score 49-43. The Steelville defense forced a Licking timeout with 31 seconds remaining after their full-court press kept the Lady ‘Cats from crossing half-court.

The Lady ‘Cats returned to the floor and brought the ball down the court, where Taylor was fouled. She hit one for Licking’s final score of the game, with 25 seconds left. Steelville connected with a three at the 11-second mark then called timeout. Another three made the score 50-49, but Licking held on as time ran out for the Lady Cardinals.

Licking will face Strafford Saturday at 6 p.m. in Bolivar at SBU’s Meyer Wellness Center for the Quarterfinal game.