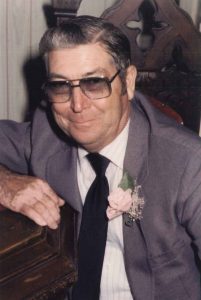 Lance Willard Adey was born September 23, 1924, to John Henry and Stella May Adey at the family home in the Arthur’s Creek Community. He passed away March 6, 2022, at Texas County Memorial Hospital at the age of 97.

He was united in marriage January 3, 1949, to Laura Etta Reeves, they had seventy-three wonderful years together. To this union three boys were born, Willard Lee, Freddie Lynn and Michael Keith.

Willard loved his family and loved spending time with his boys. He was a hardworking man doing many jobs to support his family. He drove a school bus for Houston Schools for 16 years, worked at numerous stores in the Houston area, but was a farmer at heart, raising feeder pigs and beef cattle. He and his family did custom hay baling all over Texas County with Laura shuffling equipment and driving tractors. He spent all his 97 years on his family farm.

He was baptized July 5, 2012, in the Big Piney River along with his granddaughter.

He loved to talk about his childhood days when he went to Arthur’s Creek School. He got paid in the winter to get up early and walk to school to get a fire going in the old wood stove so the school would be warm when the teacher and pupils arrived.

He talked often about when he was a kid going to the Prescott Store to trade milk and eggs for sugar, coffee, and kerosene. He said anything you needed to buy could be bought at the Prescott Store. He loved to talk about old times and his family could sit for hours enjoying his memories.

Willard loved to soak up the sun in the afternoons sitting on one of his porches with his beloved dog Rocky by his side. She was his baby, and she enjoyed his loving attention he gave her.

He is survived by his wife of 73 years, Laura of the home; three sons, Willard and wife Nancy, Freddie and wife Pat, and Michael and wife Anita all of Houston, Mo.; two grandsons, Steve Adey and wife, Lisa, and Justin Adey and wife, Mandy; granddaughter, Jennifer Gabel and husband, Jeff all of Houston; several great grand kids; and numerous nieces and nephews.

Willard would want us to think of him with a smile on our face. He loved a good time and to have his photo taken with family. But do not be surprised to find out he was making rabbit ears behind your head. Such a Prankster! He was a kind, gentle, loving man and will be greatly missed by us all.

The dinner table will not be the same without you. We love you dad, and we will see you one day!

Memorials may be made to Arthur’s Creek Cemetery. Online condolences may be expressed at www.evansfh.com.