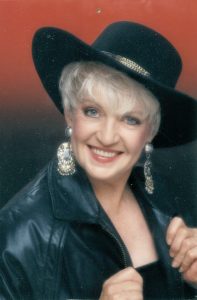 Fondest of farewells to our dear mother, Marilyn M. Lee, age 90, in passing to her heavenly home Feb. 26, 2022, from complications of pneumonia.

Born September 26, 1931, to Malcolm (Mac) D. and Margaret B. McCurdy, she was the second child to the Scotch household. Marilyn was nurtured into the holy spirit by the Fairmount Christian Church congregation where her father served as Elder. Mac was also a 31st degree Mason serving as Postmaster General of Kansas City, Mo., while her mother built success as a corsetiere for Spirella Corset Company and as a sales representative for Luzier Cosmetics.

The wake of the Great Depression wrought a very frugal nature in Marilyn. A wisp of a girl raised in strict manner, she grew to know the consequences of leather strop and garden hose. She became fleet of foot, loved to run, climb trees, play with bugs, and take risks; often hiding outside her window on the steep second story roof of their home. Older brother Don seemed the favorite. He’d start the trouble and she’d finish it, but most often as suspect.

Marilyn loved animals and nature. Her budding beauty truly revealed as a rodeo showgirl with a Kansas City horse club in her teens. She often reminisced of her favorite dog, “Taffy.” Throughout her life rarely was the family without pets. Cats were a must.

Adolescence graced her with the looks of Marilyn Monroe and the zaniness of Lucille Ball. She recently confided never telling anyone that for years she thought islands just floated around in the ocean. Marilyn was an apt student, though apparently easily distracted in geography.

Her infectious laugh and beautiful, beaming smile were personality trademarks. Athletic, optimistic, enthusiastic, trustworthy, sympathetic, and loyal exemplify her character. Naive but brave, Marilyn was so excited on her first trip to Florida she donned swimsuit and ran straight into the beautiful gulf surf, diving headlong into a swarm of stinging jellyfish. Not a memorable event but try forgetting that.

Marilyn’s creative talent and artistic flair showed throughout her life in all endeavors, from singing, writing, painting, floristry, restoration crafts, to doodles and even as dance instructor for Arthur Murray Dance Studio in the mid ‘50s.

While grieving at the hospital with her husband in a coma shortly before his death, a passing doctor consoled a sobbing Marilyn. His professional, gentile manner left an impression. By happenstance, said doctor gave a sermon at her church a year later. She was surprised to find out he was the cardiologist for a close friend’s husband. Fate took over after Marilyn’s formal introduction to Dr. Gerald B. Lee, M.D.

She always dreamed of a better lifestyle but little could have prepared her for this destiny. A whirlwind romance brought Marilyn to settle into a family of four children in her second union, readily accepting Gerald’s gang ranging in age from toddler to teens; Sharon, Bryan, Jonathan and Melanie.

Gerald and Marilyn happened to be nearby when the Hyatt Regency collapsed in 1981, tragically killing 114 people. The doctor, his wife and medical staff rushed in to provide first aid to many of the 216 critically wounded victims.

Marilyn’s finest achievement by far was filling the voids created in the lives of Dr. Lee’s children from the demands of a profusely diverse professional career. Gerald’s burgeoning dependency on his wife was tantamount to each child’s individual growth and success. All became shining stars in their own right.

Active in politics, Gerald persistently lobbied for Missouri Conservation issues in Jefferson City. He was involved in varied community, city, and county affairs, holding many positions on related boards, and even ran for City Council in 1988. Marilyn rose to meet each exciting, new challenge in her life, winning hearts every step of the way.

Gerald owned several tree farms across the state of Missouri, requiring regular maintenance visits; his beloved farm Paddlewheel, aka “Shang-ri-la,” steadfastly a passionate focal point. Marilyn worked diligently by his side for 42 years, living the life filling much deserved leisure times, enjoying international travel, theatre, cruises, and attending varied medical/political/forestry conventions. They proved to be quite the extraordinary couple, still kicking up their heels and dancing up a storm well into their late 70s.

Marilyn’s frugality kept the good doctor in check but not without an occasional hiccup. She booked a St. Thomas, Virgin Island, cruise advertised at tremendous savings. Arriving at port expecting to board a mammoth cruise liner, they were mildly shocked at the 52′ catamaran awaiting their “Windjammer” Cruise adventure. Seven fabulous days gripping the rails under the sails of a rocking, rolling boat.

Their social circle ran the gamut from rubbing shoulders with ultra elite to poverty stricken masses, charitable giving always a staple in their lives. Marilyn felt guilt being blessed so richly and strove to share her good fortune with others day to day. They faithfully attended Raytown Christian Church throughout their marriage. Always a devoted wife and mother, Marilyn went out of her way to stay in touch with family and friends. Her annual Christmas letters detailing the past year’s events were eagerly sought by all recipients, although arriving sometimes a tad late.

Tragedy slowly beset their lives and Marilyn faithfully attended to Gerald during his lengthy illness before his passing in 2016.

Marilyn loved laughing, chocolate, and the gift of GIVING! If considering a gift in memory of Mom please consider any humanitarian relief or animal rescue charity.