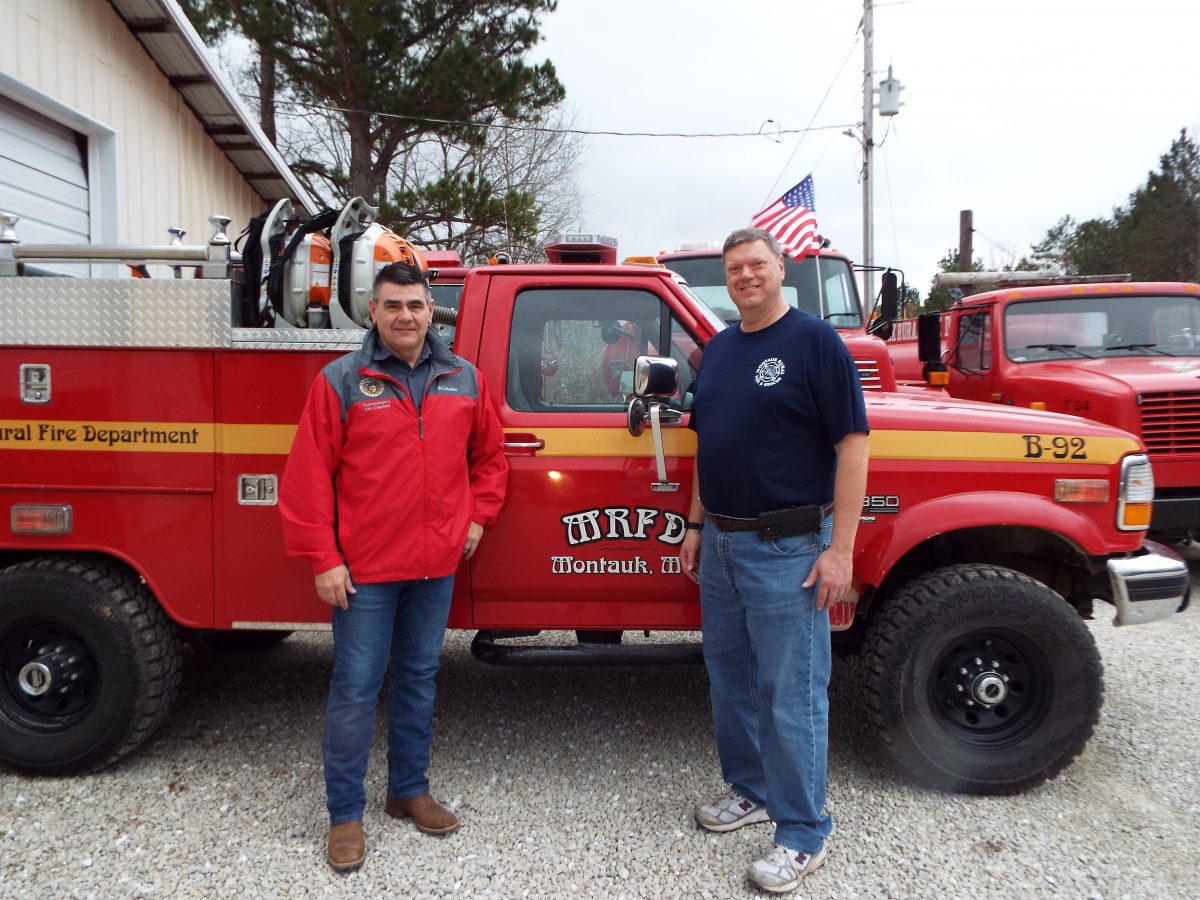 Photo by Christy Porter
State Representative Ron Copeland, District 143, left, and Montauk Rural Fire Department Board President Bill Hansen are shown with some of the fire department’s equipment, which was moved out of the building to make room for the dinner.

Montauk Rural Fire Department held a fundraiser Saturday evening to benefit the membership based organization. The volunteer department prepared chili and hot dogs, along with sides and desserts for supporters, and offered a raffle with a first prize of a turkey gun or $300.

Board President Bill Hansen thanked the volunteer firefighters for giving their time and risking their health for their neighbors. He also thanked the board members and everyone who contributed to making the fundraiser happen. Several organizations and individuals have recently supported the department with grants and donations of money and food, including Intercounty Electric in conjunction with CoBank and Sho-Me Power, U.S. Foods, Walmart, Current River Buildings, FOE of Salem, Harbor Freight and Joyce Inman.

Hansen and Fire Chief Larry West shared that the fire district covers about 90 square miles. About 60 percent of the residents in the area are members (about 600). Their area includes Montauk State Park, and they are bordered by Dent County, Jadwin, Raymondville, Licking and Lenox fire districts. In addition to responding to fires, the department also responds to EMS calls, and a helicopter pad is available at the fire station if air transport of a patient is needed. They provide mutual aid to surrounding districts, as well.

The volunteer firefighters train every other week to be prepared for whatever they may encounter. In addition, the fire department board meets on the second Wednesday of each month. They are always open to more volunteers, and a junior firefighter program is available. The department is also associated with the Bob and Dorothy Wind Scholarship committee, which offers scholarships to people interested in pursuing a firefighter or other first responder career. Those interested in applying for the scholarship should request more information by email at barry_reynolds@hotmail.com.

If you missed the chili and hot dog fundraiser, three other events are typically held each year. Their pancake and sausage breakfast coincides with the kid fishing day at Montauk State Park. A ham and beans dinner is held the weekend of the Rose Holland Trout Derby. And in September, they have their annual members’ meeting.