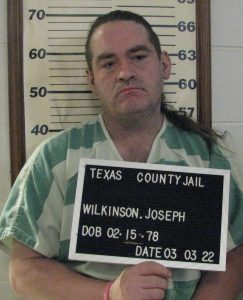 On the evening of March 3, Texas County deputies received a report of an unregistered prior sex offender residing at a residence in the Bucyrus area. Deputies located Joseph Wilkinson working at a business in Houston. Wilkinson was taken into custody and transported to the sheriff’s office. During an interview, Wilkinson admitted that he was required to register in Colorado and had not done so since moving to Missouri in January. A records check indicated that Wilkinson had absconded from the Colorado sex offender registry.