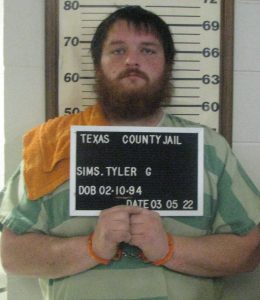 On the evening of March 4, Texas County deputies received a report of a person driving a green Ford Mustang that had fled from a Licking Police Department officer and later from Dent County sheriff’s deputies. Texas County deputies observed the Mustang near the intersection of Route AB and Route VV and attempted to make a traffic stop. The driver of the Mustang failed to yield and a pursuit was initiated. The pursuit traveled several county roads and ended up on Route V. While traveling east on Route V, the driver of the Mustang struck one of the deputies’ patrol vehicle and intentionally tried to force his vehicle off the road. Another deputy was able to initiate a pursuit intervention technique and force the suspect vehicle into a ditch and stop. Deputies then took the suspect, Tyler Sims, into custody without further incident. A records check indicated that Sims was already on probation for resisting arrest.