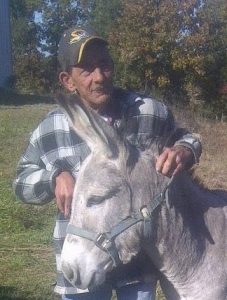 Buck was a man with a lot of love for and pride in his family. He always wanted to know what and how everyone was doing. He’d usually have an update on somebody any time you talked to him. You might say he was a bit nosey sometimes, but it was the love he had for everyone that kept him asking questions and telling you about everybody.

He enjoyed spending time with his family, especially when he got to see his grandkids. It was always a highlight when he got his kids and grandkids together for some BBQ. He always enjoyed anything that gave him people to talk to. There were many hour plus trips to the store for a gallon of milk or loaf of bread because there was always someone to “visit” with. The last few years that changed to lots and lots of phone calls as he started having a tougher time getting around. There was a good-natured orneriness about him and it’s likely that nearly everyone that knew him had been picked on at least a little. He enjoyed watching and driving in demolition derbies and made many friends doing so. He loved a good fish fry and likely hit you up for some fish if he knew you went gigging or fishing. He spent a good part of his life working around the sawmill. Depending on the day he was either proud to be part of it with his brothers or ready to never see it again.

Buck will always be remembered for working hard, loving his family, and being ornery.

Darrell is survived by his wife, Susie; four sons, Nathaniel (Stephanie), Joshua, Wilford “Willie” and Terry; eight grandchildren, Mackenzie, Ryleigh, Bryson, Isaac, Celeste, Logan, Clyde and Summer; his brothers, Don (Chris) and Dale (Sue) Storm; special cousin, Sara Kay; his brothers and sisters in law, Sidney, Terry, Chris, Doris and Carol; and a great many nieces, nephews, cousins and friends that were like family. He was preceded in death by his parents, Lloyd and Lois; beloved grandson, Waylon Storm; and many aunts and uncles that he held dear and missed.