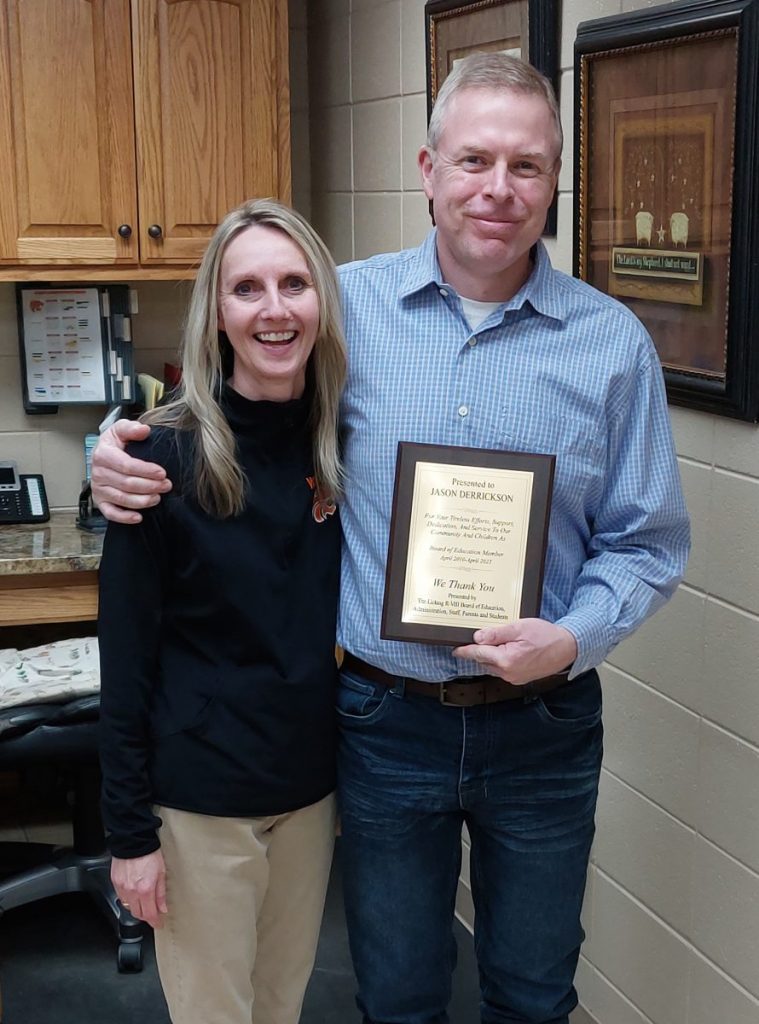 Photo by Shari Harris
Jason Derrickson’s wife, Nancy Derrickson, was on hand at the final school board meeting for Jason on Monday, March 14. Derrickson has served 12 years on the Licking R-VIII School District Board of Education and received a plaque of appreciation from the Board.

The Licking R-VIII School Board of Education met on Monday, March 14, for their regular monthly meeting.

The Board approved the consent agenda, including minutes from the previous meeting and payment of bills. Financial highlights included completion of installation of cameras, vape detectors and fire alarm systems in the new 5th and 6th grade building.

Items of business began with a recognition of retiring member Jason Derrickson, who was presented with a plaque of appreciation for 12 years of service on the board. Derrickson has opted to not run for re-election and his seat will be decided in the April 5 election, prior to the next board meeting.

Cards made by elementary students were read and enjoyed by board members.

The A+ Program overview was presented by High School Principal Dr. Jarad Rinne. In 2021, 23 graduates received A+ scholarships, 29 are currently working toward it in the class of 2022. The math requirement has been dropped for this year, which made six more students eligible.

The Fine Arts Report was shared by Dr. Rinne and Elementary Principal Julianna Thrasher. A Spring Concert is scheduled for May for 4th, 5th and 6th grade students. A Vocal Music Festival is planned for April 22, including small and large ensembles and soloists, for 5th grade through high school students.The high school band and choir performed at the District Competition in West Plains. Both received “2” ratings, and both were one point away from a Gold “1” rating. The Visual Arts high school students will be showcased at the Spring Concert, with some works on display at Town & Country Bank through the end of March, and with Progressive Ozark Bank displaying Elementary Art. There are 15 active JH/HS Art Club students.

Two items of business, tenured and non-tenured staff lists, and teacher evaluations – principals, were on the agenda but were moved to closed session.

Salary study information was presented by District Superintendent Cristina Wright. About $330,000 would be required to increase pay for certified and non-certified staff to the recommended level. The salary study is ongoing through June.

Regarding summer school, the principals had met and discussed increasing summer school to full days but decreasing the overall duration to 9 days. Incoming kindergarten through sixth grade students would receive in class instruction and junior high/high school students would be able to complete credit recovery on campus through the LAUNCH program. If enrollment allows, bus routes out of town may be run. The first week would begin May 23, then the final four days would be the week of Memorial Day.

The Board discussed calendar updates, with 13 snow days and 1 AMI day taken thus far. The State does not require snow days to be made up as 10 snow days were built into the schedule. Administrators recommended the days not be made up and the Board opted to not make changes to the calendar to make up the days.

Supt. Wright updated ESSER III funding. DESE will take revisions to the plan, and the Board can make changes to use more of the funds toward salaries if they choose.

The Life 360 program was introduced to the Board. The program offers free snacks/meals to all students every day at no cost to the district. It is funded from donations, and could replace snacks that are currently brought in by parents of elementary students. The Board voted to participate in the program.

Other discussions were held. The preschool roof needs to be replaced. The clinic and Mr. Buckland’s classroom need roof work. 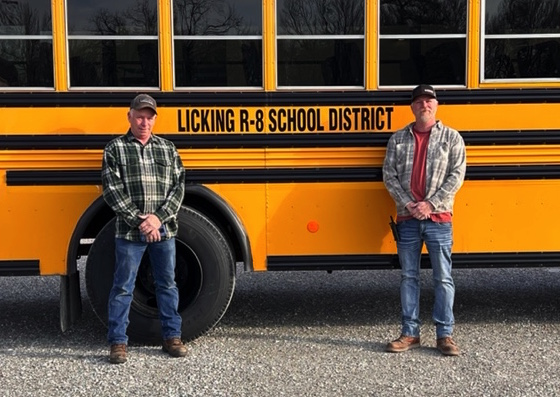 The bus inspections were completed Wednesday, March 9. The school received 100 percent on the inspection, a rare occurrence for a district with a high amount of travel on gravel roads.

Parents as Teachers (PAT) program fees of $1350 were approved, and the Co-op agreement was approved by the Board.

A request to surplus four welders was tabled.

Supt. Wright reported that tenured and non-tenured contracts were approved.

Wright reported, “The Board approved two new substitute teachers, Mr. McCloy and Mr. Todd Todaro. Board members accepted resignations from Mrs. Louise Beasley, Ms. Dalrayn Feringa, and Mrs. Kelly Black, and thanked each of these ladies for their service to the district. The Board accepted notice of retirement from Mr. Kirkwood, and each member thanked Mr. Kirkwood for his dedication to the Ag and FFA programs over the past 6 years.

“The Board approved a new program known as Licking Leadership Institute starting in the 2022-2023 school year. This program will support teachers considering administrative careers,” Wright said.