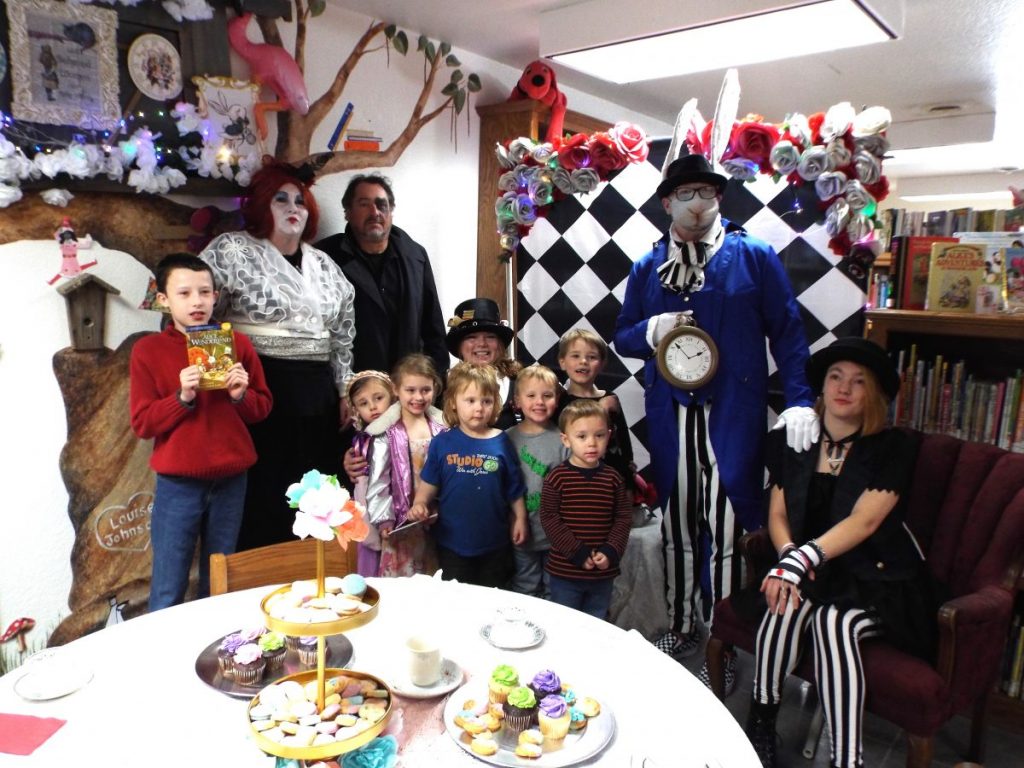 Photo by Christy Porter
Attendees at the tea party were, from left: The Queen of Hearts, Lorraine Landers; her nave, Jack, Steven Landers; the Mad Hatter, Cindy Badgett; the White Rabbit, Erik Badgett; and Apprentice Mad Hatter, Savannah Hollister-Badgett; they are surrounded by the children at the party. Not pictured was Alice, Brandie Smith; and Miss Texas County Outstanding Teen, Gianna Westlund.

The children were delighted and a bit in awe when characters from Lewis Carroll’s book, Alice in Wonderland, strolled into the Licking branch of the Texas County Library on Saturday morning for a tea party. As Alice, the Mad Hatter, the Apprentice Mad Hatter, the White Rabbit, the Queen of Hearts, her Nave, Jack, and Miss Texas County Outstanding Teen joined the party, it indeed got “curiouser and curiouser!”

The Cheshire Cat was hanging from a tree and magic mushrooms were hanging from the sky (ceiling). Teacups, except for those being used, were set upside down on a saucer full of flowers; teapots were full of flowers and cards; pink flamingos were in the most unusual places and a conundrum of signs leading to nowhere were everywhere.

Amongst the “chaos” were delightful cookies and treats, graciously donated, and delicious cupcakes donated by My Little Cupcake. The children also enjoyed choosing their own flavor of Magical Tea! Even the parents were treated to sweets and tea. It was as though everyone was asking, “I suppose I ought to eat or drink something or other; but the great question is, ‘What?’”

While the children dined, Miss Texas County Outstanding Teen Gianna Westlund read a younger child’s version of the classic, and the Mad Hatter followed with a slightly older child’s version.

Prior to the conclusion of the tea party a raffle was held with two Alice in Wonderland books given to the winners.

And so the question posed by Alice, “What is the use of a book…without pictures or conversation?” was answered.